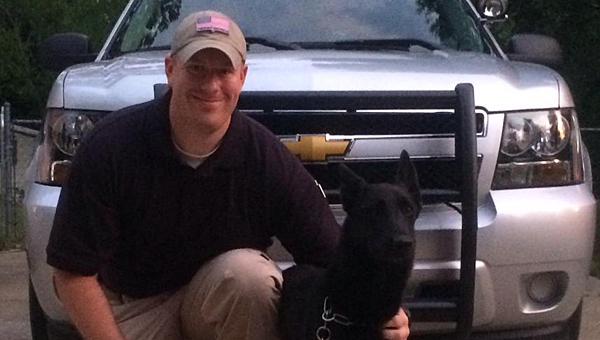 ALABASTER – The Alabaster Police Department recently hired a new officer, but he does not drive a patrol car, carry a radio or dress in blues. However, his impact on the department is just as important as any other officer.

Over the past few days, the department has been working to train Micco, its new Belgian malinoisK-9 officer, which is assigned to officer Hunter Hammonds.

Although Alabaster has had K-9 officers in the past, Micco marks the first in nearly two decades, Alabaster Police Chief Curtis Rigney said.

“He is a narcotics dog, and he will be used for that,” Rigney said during an Oct. 6 interview.

Once Micco’s training classes are finished in five weeks, he will be ready to sniff out narcotics and find illegal controlled substances in nearly any setting.

“We will be using him for a variety of different things,” Rigney said, noting the dog will be able to search for illegal narcotics during events such as traffic stops and searches at schools. “He isn’t our first K-9 officer, but he is the first one we’ve had in 15 to 20 years.”

When the department received the Belgian malinois a few weeks ago, it turned to the community to help name the new four-legged officer. Over several days, the department accepted votes on its Facebook page for several possible Native American-themed names chosen to honor the city’s Warrior spirit.

When the votes were counted, the vast majority came in for Micco, which means “Chief” in the Seminole language.

“It wasn’t unanimous, but a great majority cast votes for Micco,” Rigney said, noting Micco has been a “hit” on the department’s Facebook page. “We’re glad to have him with us.”