‘It’s just who he is:’ Officer stops to toss pigskin with young boy 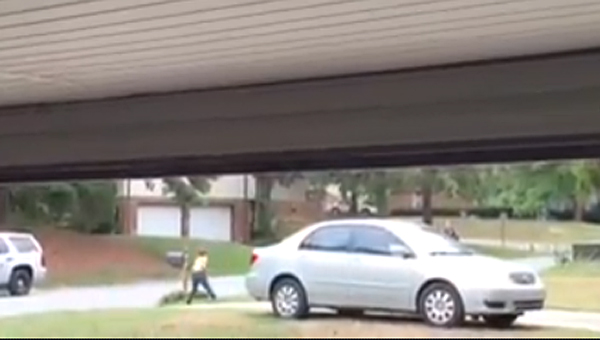 A still shot from a video captured by a neighbor depicts Lt. Jason Boyd, right, tossing a football with a young boy. (Contributed)

ALABASTER – Alabaster Police Chief Curtis Rigney wasn’t surprised at all when he saw the video of his department’s Lt. Jason Boyd stopping to throw a football with a young boy who otherwise would have been playing alone.

“That’s not the first time he’s done something like that. It’s just who he is,” Rigney said of Boyd after watching the video, which was captured by the boy’s neighbor, Justin Honeycutt, on Sept. 29.

Boyd was out on his daily patrol when he noticed the boy tossing a football into the air by himself in his front yard, Rigney said.

“He said ‘I’ll stop and throw it with you for a little while,’’ Rigney said of Boyd. “Apparently, the neighbor saw it and filmed it. They sent it to me, we put it on Facebook and it just exploded from there.”

The short video – which Boyd did not know was being filmed – depicts the lieutenant tossing the pigskin with the boy for a few seconds, and has generated a swarm of activity on the department’s Facebook page.

As of Oct. 7, the video had garnered 888 likes, 151 comments and more than 40 comments praising Boyd for his actions. Many of the comments indicated the actions were not out of the ordinary, painting him as a selfless and caring man who doesn’t think twice about helping those in need when he has the opportunity.

“You know, I’m just doing what’s right.” Boyd wrote in a post on the department’s Facebook page. “It’s hard to see a boy out here by himself throwing the ball.”

Rigney said several of the department’s officers would have done the same in a similar situation.

“I’m proud of him,” Rigney said. “Some of our guys are just like that.”