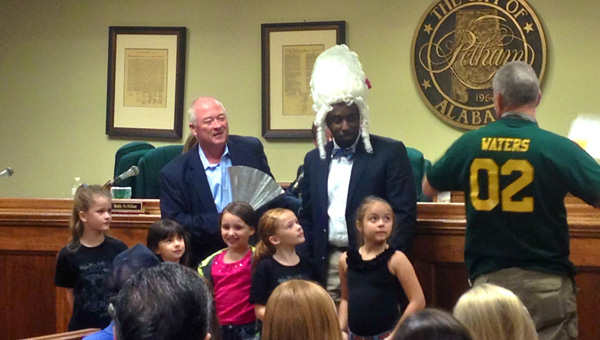 PELHAM—A new Mother Ginger has been named. Following Pelham tradition, this year’s Mother Ginger for the Grebel Center for Dance production of the Nutcrakcer was chosen in a “Passing of the Wig” ceremony during an Oct. 6 City Council meeting.

“This is something that needs to go to someone who has great promise on the stage, in the theater,” Scott said, noting the role also required “a lot of rehearsal time.”

Mother Ginger is a widely recognizable character from the Nutcracker ballet, as the woman with the large hoop skirt. Mother Ginger traditionally appears during the second act of the ballet and gingerbread children, also called Polichinelles, emerge from her skirt.

“I’m looking forward to you all,” Mercer said to the dancers and families from the Grebel Center for Dance gathered at the Oct. 6 meeting. “I’m sure it’s going to be an exciting Christmas.”

Nutcracker performances will be held Dec. 19-21 at Pelham High School. Tickets are available online and range from $5-$10 for children 5-years-old and younger and $10-$15 for adults. Tickets can also be purchased at the door for $15.

More information is available at Grebeldance.com.

Sullivan’s record a feat all of its own [COLUMN]

Could you imagine riding a bike this close to an 18-wheeler? Me neither. (Contributed) I have the utmost respect for... read more