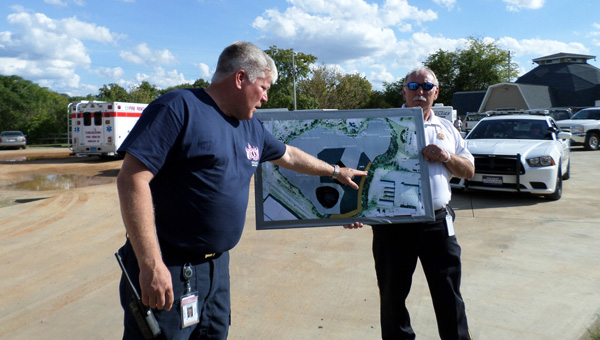 PELHAM—The search for a diver missing from Dive Alabama since Oct. 4 continues today at a Pelham quarry on Industrial Park Drive.

“The status of the search is still the same,” Pelham Fire Department Chief Danny Ray said.

The search for the diver, identified as Daren Gray, 49, of Spring Hill, Tenn., began shortly after he did not return from a routine dive at 4:30 p.m. and was reported missing by Dive Alabama on Oct. 4.

“We have a lot of different resources here today,” Ray said noting the arrival of additional personnel and technology from agencies across Alabama and Tennessee.

The Oct. 7 search team consisted of around 70 personnel, including more than 30 divers, 10 of whom are deep-water divers specializing in depths of more than 130 feet, Ray said.

Four remotely operated vehicles have also been deployed underwater to aide search efforts, and a Hoover Police Department helicopter flew over the quarry “to see if there is anything suspended that needs to be investigated,” Ray said.

“We’re starting to work the really deep areas, which has really slowed things down,” Sides said, noting searching the deepest parts of the quarry will be a “very tedious, very time consuming operation.”

Specialized technical divers and remotely operated vehicles are searching the deepest parts of the quarry, which can measure more than 140 feet in depth.

“Those divers have such little time,” Sides said of the deep-water divers. “They can only stay there for so long before they need to decompress.”

Along with the physical limitations of divers, visibility and “treacherous terrain” underwater have posed challenges to the recovery operation, Sides explained.

“It’s just very murky because of all of the silt that’s down there,” Sides said, noting a visibility of five feet in the deep parts of the quarry.

Although no witnesses confirm seeing Gray in the water before his disappearance, both Ray and Sides said there is no significant evidence to suggest that he made it out of the water. Twenty-foot vertical walls enclose the southeastern border of the quarry, and the remainder is surrounded by “heavy vegetation” and “boulder areas,” Ray said.

“You have to remember, these are shear walls,” Ray said, noting Gray was wearing more than 50 pounds of dive equipment. “There is no evidence that he shed his equipment on any shoreline.”

“All of his personal effects are here,” Sides said, adding Gray checked in before his dive and his car remains in the Dive Alabama parking lot. “We have no reason to suspect that he is not here at this time.”

“At this given time, it’s a recovery,” Palmer said. “We’re supporting the fire department.”

Sides said the search will halt around 6 p.m. on Oct. 7, when “visibility gets very bad,” and resume again the following morning.

“We’re still optimistic that maybe he’s going to be in one of those really deep areas,” Sides said.