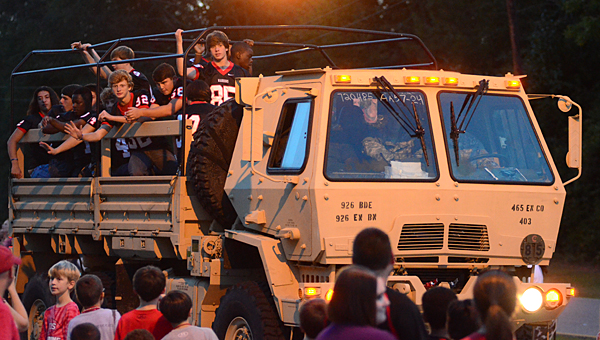 ALABASTER – The Alabaster Board of Education is preparing to break ground on its new 365,000-square-foot high school within a month, the city’s school superintendent told the thousands of students and residents who turned out for Alabaster’s homecoming parade on Oct. 8.

“Our best days are ahead of us as a school system,” School Superintendent Dr. Wayne Vickers told the packed home stands at the newly renovated Larry Simmons Stadium during a pep rally after the parade. “We will break ground in the next month on our new, 365,000-square-foot high school and athletic complex.

Oct. 8 marked Alabaster’s second homecoming parade since 1967, and was themed “Warrior Pride.” The parade began at Thompson Middle School, and traveled down Warrior Drive before turning right on Thompson Road. The parade then turned left on Alabama 119 before ending in the Thompson Sixth Grade Center parking lot. 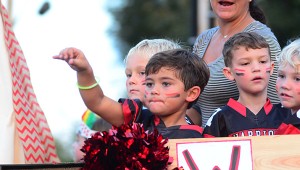 An Alabaster youth football player tosses candy from a float during the parade. (Reporter Photo/Neal Wagner)

This year’s parade grand marshal was the Alabaster City School System’s mascot and therapy dog, Warrior the Australian shepherd, who rode in the parade’s lead car with his handler, Windy McNish.

In advance of the Warriors’ Oct. 10 football game against the Hewitt-Trussville Huskies, THS Principal Chris Tangle thanked the community for its support at the parade.

“These guys worked really hard to make this happen tonight,” Tangle said of the parade’s organizers. “I’m happy to see such a great turnout. It means a lot to our high school.”

“In the midst of an emotional and tough season, these guys need your support,” Montgomery said. “Those of us who have been here for awhile are starting to see the ashes, so this program can rise from the ashes to the top.”

For more photos from the parade and pep rally, visit facebook.com/alabasterreporter.