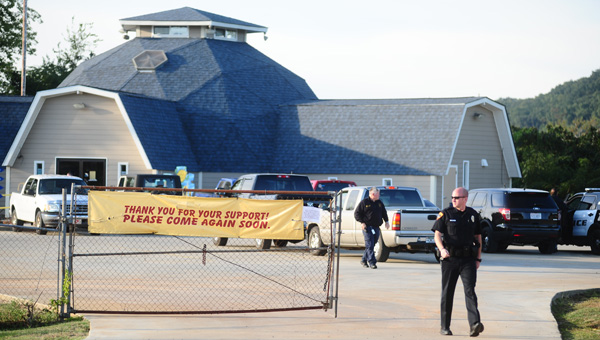 Searchers have identified an area of interest in the search for a diver reported missing from a Pelham quarry on Oct. 4. (Reporter Photo / Jon Goering)

PELHAM—Efforts in the search for a missing diver focus on a narrow area of interest, as the search enters its fourth full day at a quarry off of Industrial Park Drive in Pelham.

The diver, identified as Daren Gray, 49, of Spring Hill, Tenn., was reported missing after failing to return from a routine dive at Dive Alabama around 4:30 p.m. on Oct. 4. Since that time, search and rescue teams from across Alabama and Tennessee have been working to locate Gray in the 27-acre quarry.

As of 2 p.m. on Oct. 8, Pelham Fire Department Deputy Chief Blair Sides said searchers had covered 80 percent of the quarry. The remaining 20 percent includes parts of Gray’s submitted dive plan and exit plan in deepest areas of the quarry, which reach depths of more than 140 feet.

“He frequented this quarry,” Sides said of Gray. “He knew this quarry and he had areas he liked to go. Unfortunately for us, those are the deep areas.”

The search team did identify an area of interest and have been carefully examining that area using specialized technical divers.

“We’ve got an area of interest… based on some sonar signatures and evidence divers saw when they were underwater,” Sides said.

According to Sides, sonar operators reported “positive signatures” indicating the possible existence of dive equipment or the diver.

The area of interest is a 600-foot by 600-foot expanse “just outside” one of the deepest parts of the quarry off an old roadbed, Sides explained.

“Based off of the dive plan the diver filed, it looked like that was his exit plan out of the quarry,” Sides said.

The task to clear the area of interest could take searchers the entire day, Sides estimated, noting limited underwater visibility and depths in the area ranging from 105 feet to 135 feet.

Remotely operated vehicles, sonar technology and high definition cameras are also being used to clear other areas and rock formations in the quarry, Sides said.

Sides addressed the concern that Gray may have left the quarry and may not be in the water, noting the Pelham Police Department confirmed that “nothing indicates anything other than that the diver is at this location.”

No timetable has been set on when the search will be called off, Sides said.

The search, now into its fourth full day, has involved agencies from across Alabama and Tennessee. Local businesses have also pitched in to support the search team.

“We’ve been very fortunate in the financial aspect of it,” Ray said. “As far as actual out of pocket costs for the city, it actually hasn’t been very expensive.”

Although the city “has incurred some cost,” Ray said much of the technology and manpower had volunteered to assist the Pelham agencies in search efforts. Additionally, Ray noted local businesses and organizations, such as the Holiday Inn Express, Waffle House and the Red Cross, had assisted through reduced rates and free meals.

“Seeing the community… support this effort has been amazing,” Ray said. “All we’ve had to do is ask… It’s just amazing… the Southern hospitality of the community.”