Best-selling author and local food headline the Taste of Pelham 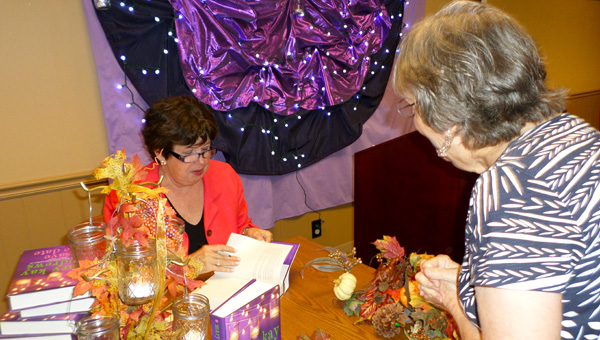 The two-part event kicked off with a catered luncheon at the library featuring guest speaker and New York Times best-selling author, Mary Kay Andrews. The author of more than 22 books, Andrews spoke about her career path from avid reader, to newspaper journalist and finally to best-selling writer.

“I grew up one of five kids… my mother would load us in the car and (bring) us to the book mobile,” Andrews said. “That’s how I became a huge reader… I don’t think I would have been a writer without that exposure to those books.”

Andrews also spoke of the important role of the library in the community, recalling an experience she had while researching for her latest novel.

“I watched children coming in to get help and do research, I saw retirees coming in to read their local newspapers, I saw young moms coming in to check out cookbooks, and it’s all free,” Andrews said, noting the library is “an amazing resource to every community.”

The Taste of Pelham continued at 6 p.m. at the Pelham Civic Complex and Ice Arena, where local restaurants and food purveyors set up booths and offered samplings from their menus while live jazz music played.

“I have only heard good comments,” Roberts said of the community feedback from the event.

Roberts estimated more than 400 people attended the Taste of Pelham, beating last year’s turnout, and roughly $10,000 was raised for the Library Guild’s building fund for a new library.

“We have done every possible thing we can do with this building,” Roberts said, noting limited parking, insufficient space and difficult access for those with strollers, wheelchairs or trouble walking as drawbacks of the current library building.

“We literally do not have any room to put any more books,” Roberts said. “If all of our books came in at one time, we would not have shelf space for them… we cannot grow any more, we cannot do anything else with what we have, there’s just not enough room.”

National Night Out held for first time in Chelsea