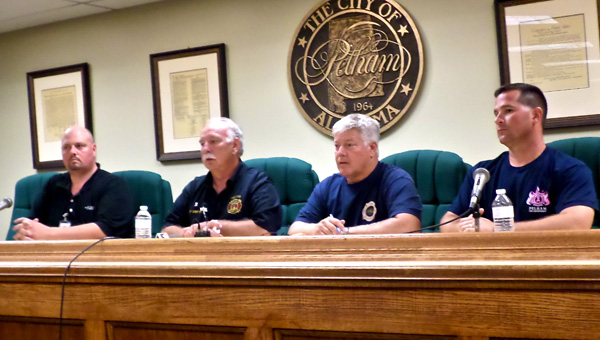 PELHAM—A more than five-day search for a missing diver ended Oct. 9 at 5:28 p.m. when rescue teams located the body of Daren Gray, 49, of Spring Hill, Tenn., in the Dive Alabama quarry.

“What we are here for tonight is to let everyone know we have closure,” Pelham Fire Department Chief Danny Ray said at a 7 p.m. press conference at Pelham City Hall. “We have located Daren Gray.”

Gray was reported missing the evening of Oct. 4 after he failed to report back from a routine dive trip at Dive Alabama, located off of Industrial Park Drive in Pelham. Since that time, more than 20 agencies and 200 volunteers have worked tirelessly to locate Gray in the 27-acre quarry.

“It has been a big operation,” Pelham Fire Department Deputy Chief Blair Sides said. “Through the coordinated effort of everyone, we were able to close (the recovery operation).”

Ray revealed a technical diver had recovered Gray’s lift bag, a piece of equipment used to come up from a dive, at a depth of around 105 feet in the afternoon of Tuesday, Oct. 7.

“We narrowed our focus to that area,” Ray said. “That helped us zero in on his location.”

A Kongsberg Maritime MS1000 sector scan sonar delivered to Pelham around noon from the Georgia Department of Natural Resources was instrumental in locating the diver in the quarry, Sides explained. The sector scan sonar was used to produce a 3-D image of the quarry and allowed the search team to explore possible “hits.”

“It gave us the ability to look at the bottom surfaces of the quarry,” Sides said. “It would just paint a picture of the area… In just a matter of a few hours it had a couple of signatures.”

“This (equipment) made all the difference in the world for us to be able to find Daren this afternoon,” Director of Shelby County Emergency Services Hub Harvey said.

Several members of Gray’s family, including his sister, father and girlfriend of 20 years, were on site when search teams located his body.

“They are some wonderful people,” Ray said. “That was one of the most difficult times I had to deal with.”

The investigation into the cause of Gray’s death is now a law enforcement case, Pelham Fire Department Battalion Chief Mike Reid said.

“The investigation started at the point of location,” Reid said.

“At this point we have no ability to say what happened,” Ray said. “All of his equipment is being secured and it will be tested.”

The investigation will be conducted by the Pelham Police Department and the Marine Police, Ray confirmed.