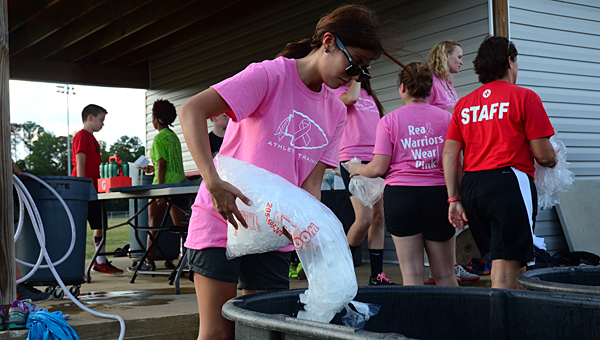 “You really become a part of the school doing this,” Keiser said. “I enjoy it because it’s really involved. Some of the injuries are really bad, and it helps you to act quickly in a situation like that.”

Keiser and 21 of her classmates spend several days each week attending practices and games for several of the school’s athletic teams. While they don’t suit up in pads or jerseys, they are just as much a part of the team as the students running for touchdowns, spiking volleyballs or hitting home runs.

“If you think about it, they are our first line of defense, and they certainly do a great job,” THS head football coach Mike Montgomery said of the student athletic trainers. “They don’t get the recognition or notoriety they deserve. We have one of the best athletic trainer programs in the state.” 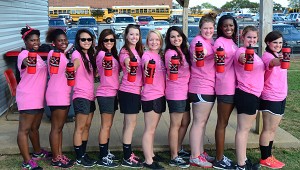 Through the program, the students work with Lemak Sports Medicine employee Donna Boyd to prevent injuries to the school’s athletes, and to treat them when they happen.

“They really take ownership of it,” Boyd, a retired Hoover teacher, said as the trainers made sure the school’s football team was hydrated during an Oct. 7 practice. “It’s really a lot of fun.”

Each Thursday, Boyd leads a voluntary class for the trainers, teaching them everything from how to identify and treat a concussion to CPR training.

THS junior Sarah Owen, who primarily works as a trainer with the school’s volleyball team, said she has dreams of being a physical trainer in the future, and said the school’s trainer program is like an extended family.

“I love all the information we learn being a trainer,” Owen said, noting she is working at a practice or a game every weekday. “It gets you into that sports realm in a very real setting.”

Members of the Thompson High School football team ride on a military transport vehicle during the Alabaster homecoming parade on... read more