COLUMBIANA – A 33-year-old Fultondale woman has been released from jail on bonds totaling $31,000 after she allegedly beat a victim with a purse during an August burglary in Alabaster. 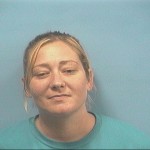 The Alabaster Police Department arrested Tiffany Marie O’Quinn, who lists an address in the 500 block of First Street in Fultondale, on Sept. 6 on felony charges of burglary first degree and second-degree theft of property and a misdemeanor charge of third-degree assault.

O’Quinn’s arrest came after she allegedly struck an Alabaster residence with a purse “multiple times” while allegedly stealing two credit cards from the victim.

According to O’Quinn’s arrest warrant, she allegedly caused a laceration on the victim’s head when striking her with the purse during the Aug. 28 incident.

According to court documents, O’Quinn was released from the Shelby County Jail after posting bonds three days after her arrest, and is scheduled to appear in Shelby County District Court on Nov. 20 for a preliminary hearing in front of Judge Dan Reeves.