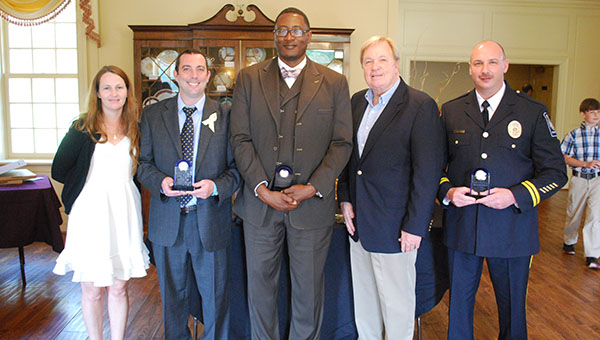 Breakfast was served in Liberty Hall at American Village and the individuals awarded were commended on their outstanding work in the Montevallo community within the past year.

Mayor of Montevallo Hollie Cost, introduced many of the award recipients and discussed some of her favorite things about the event.

“Just getting so many special people in one place is probably my favorite thing,” said Cost. “Just being able to celebrate all the work in these individuals is special.”

The morning was filled with laughs, appreciativeness and a few tears were shed.

The biggest applause came for Anthony and Meredith Tetloff, who lost their 7-year-old son Ollie Tetloff earlier in the year to childhood cancer.

They accepted the award on his behalf and praised the Montevallo community for its support during one of the most difficult times they’ve had to endure.

“When Ollie got sick, the town of Montevallo went above and beyond anything I could have ever wanted, needed or expected,” said Meredith. “A lot of times people would ask us what we needed and the town of Montevallo didn’t ask they just did. We were loved and taken care of in the most difficult time in our lives.”

Robert ‘Bob’ Butterworth was the keynote speaker and addressed some of the younger high school and middle school students at the breakfast. He talked about his background and growing up in Waldo, Ala.

“If a boy from Waldo can get to where I am today, and I’m not bragging, kids and students, you can pick any place you want to go to, only in America,” said Butterworth.

A new award called The Spirit of Montevallo Award was presented to 13-year-old McKenzie Hamby who suffers from pediatric diabetes. She has raised more than $30,000 toward finding a cure for type 1 diabetes since 2007.

Gary and Mary Martha Parisher, left, with Gov. Robert Bentley, center, who presented them with a check for $43,250 for... read more