COLUMBIANA– A 22-year-old Vandiver woman has been released from jail on bonds totaling $15,000 after she allegedly smoked marijuana while she was pregnant. 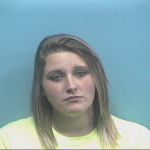 The Shelby County Sheriff’s Office arrested Chelsea Haken, who lists an address in the 2000 block of Moore Road in Vandiver, on Oct. 9 on felony charges of chemical endangerment to a child.

Haken’s arrest came after she allegedly exposed her unborn child to have contact with a controlled substance, chemical substance or drug paraphernalia.

According to Haken’s arrest warrant, the incident took place on or about Sept. 23 where Haken “knowingly, recklessly or intentionally smoked marijuana” while pregnant, endangering the unborn child.

According to court documents, Haken was released from the Shelby County Jail the same day she was arrested after posting bonds.

Haken is scheduled to appear in Shelby County District Court on Nov. 26 for a preliminary hearing in front of Judge Dan Reeves.

Chemical endangerment to a child is a Class C felony, and is punishable by up to 10 years in prison upon conviction.

By NEAL WAGNER / Managing Editor COLUMBIANA – A 31-year-old North Shelby woman has been released from the Shelby County... read more