COLUMBIANA – A 31-year-old North Shelby woman has been released from the Shelby County Jail on a $15,000 bond after she allegedly struck a child in the face with a belt in August. 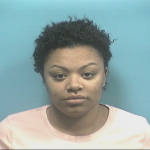 The Shelby County Sheriff’s Office arrested Starlette Marteece Guest, who lists an address in the 1200 block of Morning Sun Drive in North Shelby, on Oct. 9 and charged her with one felony count of child abuse.

According to her arrest warrant, Guest, “being the natural parent, step-parent, adoptive parent, legal guardian, custodian or a person who had the permanent or temporary care” of an 11-year-old child allegedly struck the child in the face with a belt on Aug. 28.

According to Alabama law, a person commits child abuse when they “torture, willfully abuse, cruelly beat, or otherwise willfully maltreat any child under the age of 18 years.”

Child abuse is a Class C felony, and is punishable by up to 10 years in prison upon conviction. Guest is scheduled to appear in the Shelby County Courthouse for a preliminary hearing on Nov. 26 at 8:30 a.m.