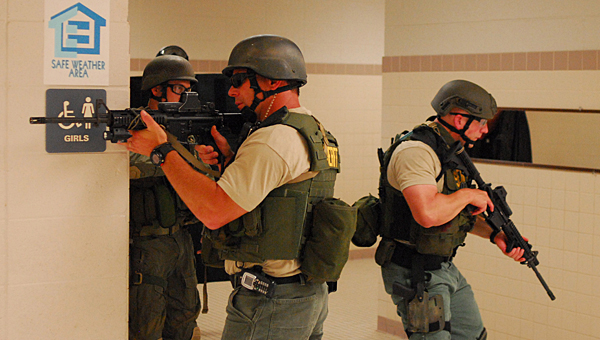 The A.L.I.C.E. training focuses on steps to take to stay safe during an active shooter situation until law enforcement personnel arrive. (File)

“It can happen anywhere,” Armstrong said during an Oct. 14 interview. “You don’t think it can happen in Alabaster, Alabama, but the same issues are in Alabaster that are in the rest of the world.”

After the Virginia Tech massacre, law enforcement and school personnel learned a great deal about ways to plan for and survive an active shooter scenario at an educational institution, Armstrong said.

At Virginia Tech, some students attempted to hide in classrooms, while others attempted to flee or fight back against the aggressor.

“Basically, everything took a turning point after the Virginia Tech shooting,” he said. “Some did what they were taught to do, and turned out the light and hid in the classroom. Another class barricaded the door, resisted and even jumped out of windows.”

Armstrong said some were injured after fleeing the classroom, but none were killed in the incident.

“The question was raised, ‘Why are people being taught to turn off the lights and wait to be a victim?’” Armstrong added.

During the training at MVES, faculty members served in various roles, such as police officers, students and teachers, in a mock live-shooter scenario at the school.

“It’s a great program, and a great partnership between Alabaster City Schools and the police department,” said ACS Student Services Coordinator Dorann Tanner. “We are excited to get that type of training.”

Over the next few months, police will hold similar hands-on training sessions for faculty members at each of the city’s schools before the faculty members begin training students in early 2015. All training will focus on how to save the most number of lives in the event of a school shooting.