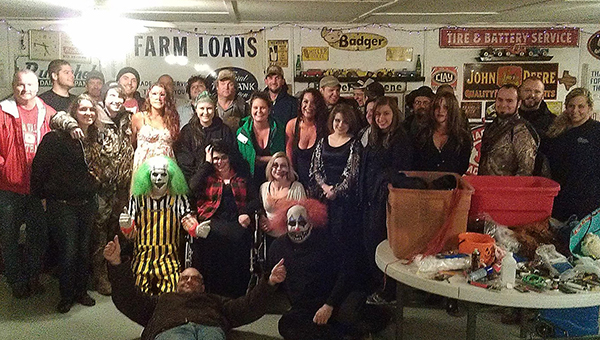 VINCENT– Don’t go into the woods. That’s the theme for the second annual Hellbilly Hollow Haunted House and Trail Ride attraction that has grown in popularity since it became a month-long event in 2013.

What used to be a one-night Halloween party, has now turned into a month-long attraction that both locals and residents from a-far can enjoy.

What sets Hellbilly Hollow apart from other haunted houses is the location. The property is located on what used to be an old dairy farm that operated for more than 40 years.

Brothers Tim and David Miller’s father owned the property and ran the dairy farm until its closing in the 1990s. Still located on the property at 425 Shelby County 467 are old barns, big fields, wooded areas, old farm equipment and even a real swamp.

James Srygley, Vincent police chief and general manager for Hellbilly Hollow, joined the team in November 2012 and talked about the preparation and time that went into making the house and trail bigger and better than last year.

“We have added on from last year to this year, and added about 70 percent more props and trails,” said Srygley. “We have added more things to the house that took several months. We started working on it sometime in June and then continued to work on weekends and evenings. Once opening day got closer, we were out here almost every day preparing.”

Srygley said the Hellbilly Hollow staff takes a lot of pride in building their own props and designing their own costumes. There are very few commercial props and costumes used, according to Srygley.

When Srygley reflects on what his favorite thing about the haunted house and trail ride are, he has a hard time singling one thing out.

“As we’re working on the house, we’ll start on a certain project and I’ll say this is my favorite thing and then we reach another project and finish it and I’ll change my mind,” said Srygley. “Once I see and hear the crowds here, that’s when I know all our hard work we put in was worth it.”

Hellbilly Hollow is open on Friday and Saturday nights at 7 p.m., and the combined cost for the haunted house and haunted trail ride is $15. You can visit their website at HellbillyHollow.com for more information.