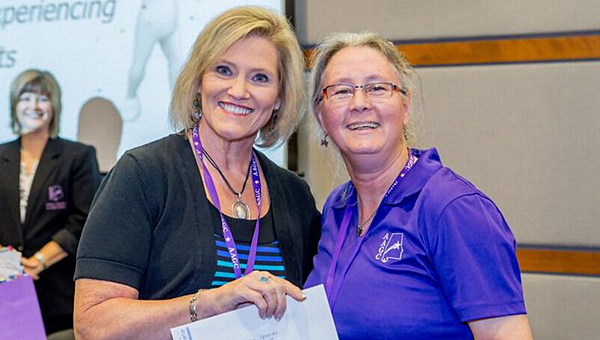 Thompson Intermediate School GRC teacher Rita Sparks, left, with Shirley Farrell from the Alabama State Department of Education at a recent awards reception at the McWayne Center in Birmingham. (Contributed)

ALABASTER – Thompson Intermediate School gifted teacher Rita Sparks doesn’t view her recent award from the Alabama Association for Gifted Children as a personal accolade. Rather, she was quick to cast the spotlight on her peers at the school.

“I was very honored to receive the award, but I give a lot of the credit to my co-workers. I like to think of it as a team award,” Sparks said.

In September, Sparks was named the Alabama Gifted Specialists of the Year by the Association for Gifted Children during the organization’s conference at the McWayne Center in Birmingham.

“The award is given to a nominee that exemplifies what it means to truly make a significant difference in gifted education and the lives of gifted students,” read a TIS press release. “We are proud of you, Mrs. Sparks, and congrats on receiving a well-deserved award.”

Sparks recently was named the lead gifted teacher for the Alabaster City School System, and has formed partnerships with organizations such as the Alabaster Radio Control Association to benefit the gifted children at TIS.

“We really try to focus on what is best for the students,” Sparks said. “We’ve had great support from the administration, and Alabaster City Schools has really afforded us the opportunity to grow in the area of gifted education.”