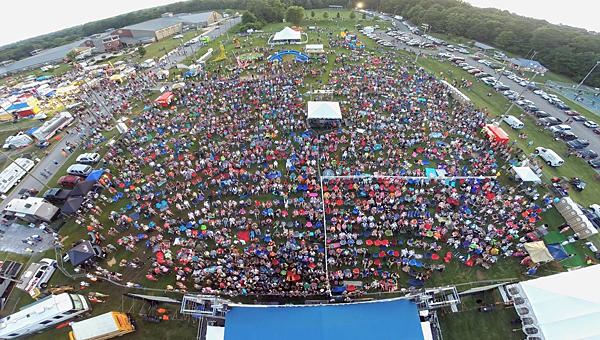 ALABASTER – As pickup trucks wheeled colorful floats onto the track at Alabaster’s Larry Simmons Stadium after the city’s Oct. 8 homecoming parade, a small white device quietly hovered over the crowd.

About 75 yards away, Kevin Henderson sat atop the newly constructed pressbox at the stadium wielding a small control panel and screen.

“That was a good vantage point. Plus, it kind of got me away from everyone,” Henderson said with a laugh. “People always have a lot of questions, and that can make it hard to control the drone at the same time.” 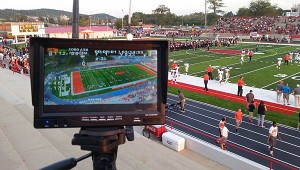 For the past several years, Henderson, who lives near Thompson Middle School, has been taking to the skies in remote-controlled aircraft. In December, he began flying a DJI Phantom 2 drone with a Hero 3 GoPro camera attached to it.

Since then, Henderson has captured stunning footage of events such as the late January snowstorm, flooding in April, the Alabaster CityFest in June and Thompson High School’s first 2014 home game in September.

Over the past several months, Henderson’s videos have become popular among local residents on Facebook for bringing a unique perspective many would otherwise not see.

Henderson, who also is involved in general aviation and flying model planes, gradually developed a love for flying drones after modest beginnings tinkering with small remote-controlled helicopters available in most malls.

From there, Henderson worked his way up to the cutting-edge $1,700 Phantom 2 quad-copter setup he uses today.

The drone is easy to control, and can fly nearly a mile from its radio transmitter, but the skies can sometimes be uncertain, he said.

“I lost one in a park in Oneonta. It’s probably still in a tree out there,” Henderson said with a laugh, noting he is planning to search for the missing drone when the foliage changes this winter. “Birds, like crows and hawks, will attack it. I had a drone drop into the ocean, and I think it was a bird strike.”

But despite the hazards, Henderson said he doesn’t plan to scale back on his drone flights anytime soon.

“I do a lot of traveling for IT work, and I usually keep the quad-copter in the car,” Henderson said. “You never know when you’ll see something interesting to shoot.”