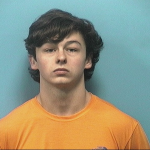 The Shelby County Drug Enforcement Task Force arrested 19-year-old Colby Christian Goza, who lists an address in the 1400 block of Oak Park Circle in Helena, on Oct. 12 and charged him with two felony counts of unlawful distribution of a controlled substance.

According to his arrest warrants, Goza allegedly distributed marijuana “while at or near 1000 First Street North” in Alabaster on Aug. 8 and Aug. 11.

Goza was released from the Shelby County Jail on bonds totaling $20,000 the same day he was arrested, according to jail records.

Unlawful distribution of a controlled substance is a Class B felony, according to Alabama law. If convicted of the crimes, Goza could face up to 20 years in prison per charge.

By GRAHAM BROOKS / Staff Writer Montevallo–October is a happening month for the city of Montevallo, and here are a... read more