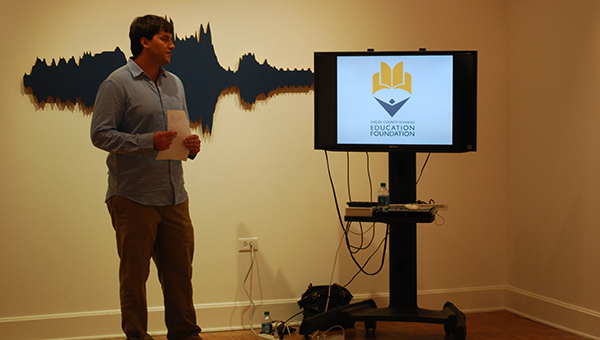 MONTEVALLO–The Shelby County Schools Education Foundation has a new logo thanks to the hard work of University of Montevallo student Billy Shaw.

Shaw’s design was chosen as the winner among eight other students who spent a little over a week designing the logos during a summer course.

Shaw, a junior at the University of Montevallo, is majoring in graphic design and working toward a degree of bachelor of fine arts, received a $250 check from the SCS Education Foundation as the winner of the design logo.

Shaw discussed what made him think of the design and how simplicity is key when it comes to marketing brands and used examples of companies like Nike and Apple.

“When I was originally coming up with the design for the logo I had a few images or tools that I used for inspiration and the one in particular was the yellow number two pencil,” said Shaw. “The lead of the pencil tapers down to a sharp point and the reason why I have it do that was to make the statement of being sharp minded and on the edge ready to go.”

Kendall Williams, director of the Shelby County Schools Education Foundation, discussed what the foundation does within Shelby County and why they liked the design so much.

“What the foundation does is that we support Shelby County School System and all the schools within that system,” said Williams. “When we presented the design to them, the key points that stood out to them was the point that your always reaching higher in education and the fact that the whole idea came from the number two pencil.”

When asked how he felt about being named winner of the design logo, Shaw responded humbly.

“I was a bit of a pessimist about it,” said Shaw. “All the other designs were so good also and very deserving.”