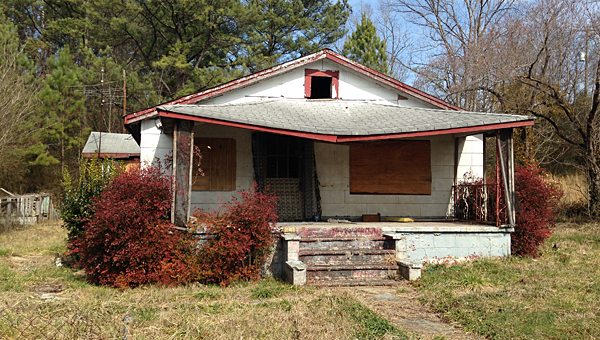 ALABASTER – A trio of newly vacant properties off Sixth Avenue Southeast now have liens against them after the Alabaster City Council approved the liens during an Oct. 13 meeting.

In March, the City Council voted unanimously to demolish three residences at 434 Sixth Ave. SE, 440 Sixth Ave. SE and 454 Sixth Ave. SE, and gave the property owner until mid-April to appeal the city’s decision before crews began tearing the houses down.

The houses were slightly east of the Shelby County Instructional Services Center off U.S. 31. All three homes were on the same piece of property, and were owned by the same person.

Because the property owner did not bring the houses up to city code or demolish them before the city’s appeal deadline, Alabaster covered the cost of tearing down and clearing the three structures.

As a result of the liens, the cost of the demolitions are now affixed to the property, and must be repaid before the property can be sold or developed in the future.

During public hearings on the houses before the City Council’s vote in March, Stevie Hawkins, who said he lived at 434 Sixth Ave. SE, said he opposed the city demolishing the houses, and asked council members to delay action on the trio of residences.

After the March public hearing, Alabaster City Manager George Henry said the city reached out to Hawkins and attempted to put him in contact with charity organizations. When asked about Hawkins, the owner of the property said she was unaware he was living in one of the houses, Henry said.