Man gets 10 years for sex abuse of children

COLUMBIANA – A 58-year-old Alabaster man will spend the next 10 years in prison after he pleaded guilty to sexually abusing two girls younger than 12 who were in his wife’s care at their Alabaster house. 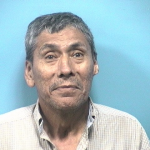 Eligio Rios Martinez, who lists an address in the 1500 block of Kent Dairy Road in Alabaster, pleaded guilty to two felony counts of sexual abuse of a child younger than 12 during a Sept. 30 hearing at the Shelby County Courthouse.

According to Alabaster police, Rios-Martinez’s wife frequently cared for children in their home, and two girls reported being molested by Rios-Martinez while at his house. Police arrested Rios-Martinez on July 2, 2013, after the girls’ mother reported the abuse to officers, Alabaster Police Chief Curtis Rigney said previously.

The daycare at the family’s house was not a certified, registered childcare facility. Most daycares in Alabama must meet stringent qualifications to be certified by the state as a child care facility.

According to his indictments, Rios-Martinez abused the girls between April 1, 2013 through June 28, 2013.

After he pleaded guilty to the crimes, Circuit Court Judge Dan Reeves sentenced Rios-Martinez to 10 years in prison, and ordered him to complete a state-run sex offender treatment program. Once Rios-Martinez is released from prison, he will be required to register as a sex offender for the rest of his life, and must avoid contact with the victims or their families.

Rios-Martinez remained in the Shelby County Jail from his July 2, 2013 arrest until he was transported to the Alabama Penitentiary on Sept. 30. The Shelby County District Attorney’s Office previously sought to deny Rios-Martinez bond, claiming the “defendant poses a danger to the public at large,” and “has family in Mexico, Texas and Idaho, and is a flight risk.”

Sexual abuse of a child younger than 12 is a Class A felony, meaning Rios-Martinez could have faced up to life in prison for the crimes.