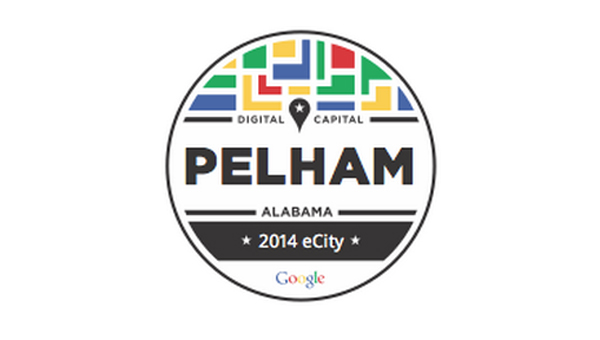 Pelham was named the 2014 eCity of Alabama by Google. (Contributed)

Pelham was recognized as Google’s 2014 eCity of Alabama, an award given to the strongest online business communities in each state.

Winning cities are determined by research done by Google and independent research firm, Ipsos. Factors such as likelihood of the small business to have a website, use a blog, promote goods and services through social media, sell products from on their website and if the business has a mobile-friendly website were all analyzed, a news release from Google explained.

“The businesses in these communities are embracing the web to find new customers, connect with existing clients and fuel their local economies,” the news release read. “Pelham joins the ranks of America’s leading cities in the digital economy.”

According to the release, Pelham small businesses have successfully used the internet to reach out to new customers and grow their customer base. Google specifically highlighted the Pelham Civic Complex and Ice Arena. As “the only ice facility within 100 miles of Pelham,” the Civic Complex and Ice Arena uses the internet to promote their services and ice sports, the release explained.

“Pelham serves as a prime example of how innovation and growth in e-commerce can successfully contribute to bolstering economic progress and competitiveness,” Google representative Emma Ogiemwayne wrote. “Google is proud to recognize Pelham’s accomplishment, and the role it plays in creating Alabama jobs.”

According to Google, 97 percent of Internet users turn to the web in search of local products and services and “businesses that are online grow twice as fast and are twice as likely to create jobs as their offline counterparts.”

“The winning cities exhibited strong engagement and potential for growth within the digital economy,” the release read.

By MOLLY DAVIDSON / Staff Writer COLUMBIANA—The prosecution and defense both gave closing arguments on Oct. 17 in a triple... read more