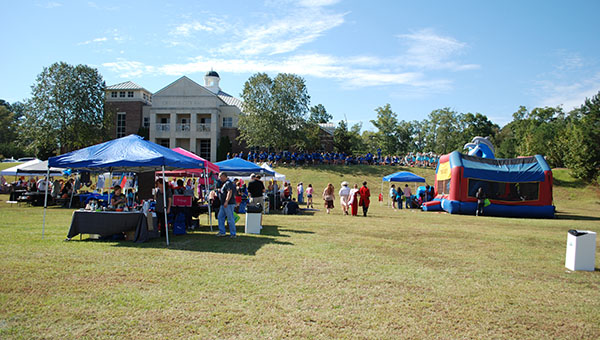 CHELSEA–The weather couldn’t have been better for the fifth annual Chelsea Day on Oct. 18.

Chelsea Day is an event filled with different business vendors as well as bouncy houses and plenty of activities with all of the funds supporting the Chelsea High School Marching Band.

The event lasted from 9 a.m.–3 p.m., and locals who attended the event could walk around and view different vendors at multiple tents while they enjoyed various tunes from the CHS Marching Band.

The event was held at Chelsea City Hall and vendor tents and games were set up on the grassy area while the marching band played at the top of the hill.

It was a chance for residents and families to come out, have fun and listen to some great music in the process.

Jon Curren, vice president of band boosters, discussed the importance of the event and some of his favorite parts of the day.

“Chelsea Day has grown a lot over the years,” said Curren. “I like seeing all the people out here coming to support the band and being able to listen to them also.”
Chelsea High School has approximately 180 students who participate in the band program and this is the main fundraiser for the entire year.

Curren has been a Chelsea resident for 10 years and discussed how the city and residents of Chelsea were supportive.

“I love how Chelsea is just a very family oriented community,” said Curren.

At two previous band competitions earlier in the year, the CHS Marching Band received superior ratings at both events, according to Curren.