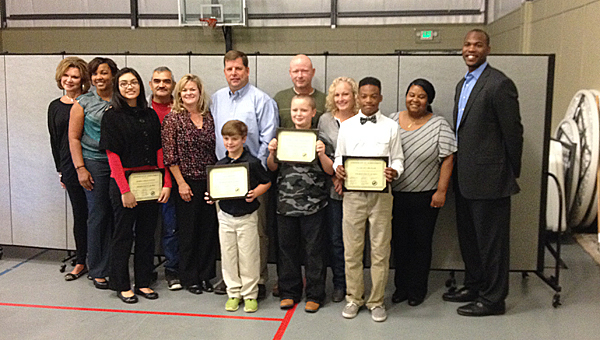 ALABASTER – Calera High School student Marina Dimas Gaytan isn’t afraid to get involved in her school and in the community. In addition to being a member of the National Honor Society, Future Teachers of America and Future Business Leaders of America at the high school, she also regularly volunteers with the Calera Public Library.

“Marina is diligent in her study habits, often studying when she could participate in other activities or hobbies,” Calera High counselor Leslie Walker wrote while nominating Gaytan for the Character in Action Award. “She organizes her time wisely so as to make time for both when possible, but certainly keeping her focus on her academics.”

Gaytan was one of four Calera students who received Character in Action Awards during an Oct. 16 Shelby County Children’s Policy Council meeting in Alabaster.

Snow said Graham never complains, frequently takes initiative to do tasks without being asked and often works to help students who are struggling.

“He intuitively knows the children that struggle and finds positive things to compliment them about without any adult direction,” Snow wrote. “One day, he complimented a student on his work. This student had been having a rough behavior day, but Mac helped change his outlook on the rest of the day with that compliment.”

In his nomination for the award, Calera Intermediate School student Tate Sudsberry was described as a selfless and well-behaved student.

“He has been observed allowing other to go ahead of him, walking away from a negative situation, and taking a stand against negative choices when others choose to join in,” read his nomination.

“Delshawn speaks with both teachers and students with the utmost respect,” Marsh wrote. “He addresses everyone in a polite manner and never raises his voice. Delshawn is a terrific example of positive peer interaction.”