MVES awarded as one of safest schools in state 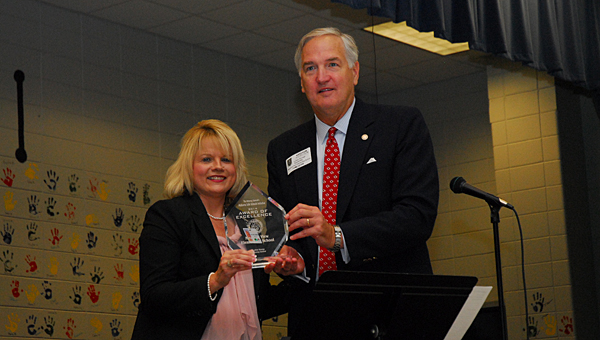 ALABASTER – When Alabama Attorney General Luther Strange walked into Alabaster’s Meadow View Elementary School on Oct. 22, he didn’t want to be treated differently than any other school visitor.

After the school’s office staff buzzed Strange into the MVES front entrance, he provided his photo ID to be entered into the school’s Raptor security system, which tracks and monitors all visitors at the school.

The school’s secretary then took a photo of Strange to print on his temporary MVES identification bade, allowing him to move freely throughout the school.

“I didn’t want to be treated any differently,” Strange said. “They entered me in the security system, and everything went smoothly.”

Strange and several Alabaster school, law enforcement and city officials joined students at MVES as Strange presented the school with one of eight 2014 Alabama Safe Schools Awards of Excellence.

A panel of judges reviewed nominations from each of Alabama’s eight state school districts, and selected MVES as the winner for District 5, which covers much of central Alabama.

Strange cited the Raptor and front entrance security systems while praising the school’s safety during the presentation.

“I’m so impressed by what’s going on not only here at this school, but in the entire Alabaster school system,” Strange said.

The Raptor system, which was funded by the MVES PTO, likely will be expanded into other Alabaster schools over the next few years, said Alabaster School Superintendent Dr. Wayne Vickers.

“We are so proud of Meadow View and the PTO,” Vickers said. “We feel we have done some things to make our schools as safe as possible, and it’s something to be proud of.

“I hope to see all schools in Alabaster win this award in the future,” Vickers added.

MVES Principal Rachea Simms said the school regularly holds student drills to prepare for everything from intruders to inclement weather.

“As a school, we take pride in keeping our students safe,” Simms said. “Our primary responsibility is to provide a learning environment. When they are safe, the students can focus on that instructional time.”

“It means everything in the world to me to keep these kids safe,” Lee said.