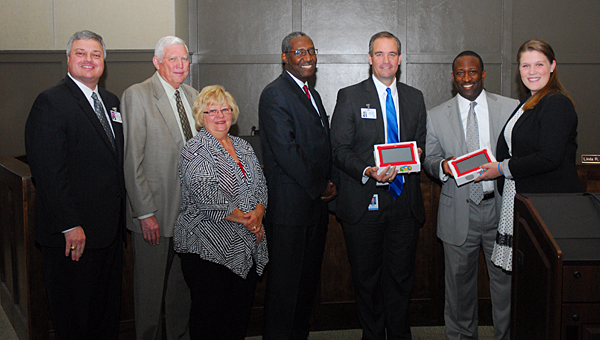 Katelin Molan, right, presents a pair of tablets to members of the Alabaster Board of Education during an Oct. 20 meeting. (Reporter Photo/Neal Wagner)

Over the past several months, Molan and several local leaders have been working to raise money through various fundraisers to purchase electronic tablets to donate to special-needs classrooms throughout the district.

“I’m involved in the peer helper program in the classroom, and I get to work with special needs students through that,” Molan said during an Oct. 20 Alabaster Board of Education meeting. “I really value education, and I enjoy being able to present these (tablets) to the special needs students.”

A few years ago, Molan and some of her friends founded the nonprofit organization “His Special Hands,” which is designed to follow Christian teachings of helping those in the community.

During the Oct. 20 School Board meeting, Molan donated two tablets – wrapped in a rubber case to ensure it will last for years, purchased by the nonprofit organization to school officials. Molan also donated two tablets to the school system in January.

Molan and others involved with His Special Hands sell items in the community, such as bracelets, guitar picks and ponytail holders, to raise money to purchase the tablets.

As her 16th birthday approached last year, Molan said she decided to forego a celebration focused on her and instead held a car wash to raise money for the organization.

Although Molan will be graduating from THS in the spring of 2015, His Special Hands has no plans to stop supporting the city’s schools.

“It amazes me that you have so much foresight,” Alabaster BOE President Adam Moseley told Molan. “She’s already got someone waiting on the wings to take this over after she transitions out of high school.

“I just want to say thank you for taking the initiative to do something like this,” Moseley added.