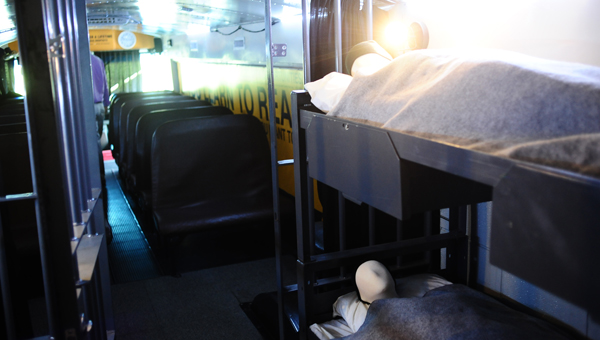 A mock prison cell is the highlight of the choice bus, which made a visit to Alabaster’s Thompson Sixth Grade Center on Oct. 22. (Reporter Photo/Jon Goering)

ALABASTER – A group of Thompson Sixth Grade Center students gasped as Lynn Smelley pulled back a black curtain revealing a cinderblock-lined dull grey prison cell on the morning of Oct. 22.

After the students had a chance to step into the cell, which was an accurate replica of cells found in an Alabama Department of Corrections prison, Mattie C. Stewart Foundation Program Manager Lynn Smelley quickly turned the students’ attention to more positive things.

“The prison cell always gets their attention, so we close it off after they’ve had a chance to look at it,” Smelley said. “Then we turn their attention to positive things like staying in school and thinking about a future career.”

From Oct. 21-24, the Mattie C. Stewart Foundation’s “choice bus” was parked behind TSGC as every student at the school got a chance to experience possible consequences of dropping out of school. The bus at TSGC is one of three choice buses the foundation tours throughout 25 states.

After entering the bus, the students watched a video featuring Alabama prisoners who shared regrets about their decisions to drop out of school. After the video, Rose revealed the inside of the prison transport half of the bus, which contained metal prison cell bunk beds containing human-sized mannequins and toilet.

“We want them to have a sense of what it’s like (to be in prison),” Smelley said. “Then we try to steer them away from negative choices, and encourage them to get that college education or get trained for the workforce.”

Each day the choice bus was at TSGC, about 250 students experienced the program. Smelley said the bus and its message has no problem keeping the students’ attention.

“Especially with this age, they have a lot of questions. I’d say about 90 percent of the time, they are really good, sincere questions,” Smelley said. “We want them to see that they have a real good chance at being successful if they just stay with it.”