The power of pink: Guardians of the Ribbon visits Columbiana 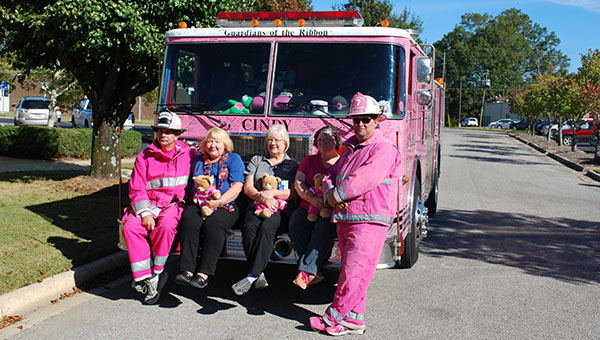 Jennifer Ray, Nena Goode and Debbie Horton received a surprise visit from firefighters Steve Pegues and Sam Jackson of the Guardians of the Ribbon Lower Alabama Chapter on Thursday, Oct. 23.

COLUMBIANA–“Pink heals,” that is the message of the Guardians of the Ribbon Lower Alabama Chapter and on Thursday, Oct. 23 the chapter and pink fire truck named “Cindy” made a surprise visit in Columbiana.

The Guardians of the Ribbon Lower Alabama Chapter is based out of Orange Beach and travels all over the state to support all women who are facing a battle with cancer.

Two firemen decked out in all pink fire suits rolled up to the Columbiana Administration Building in the pink fire truck ready to surprise three women who have battled cancer at some point in their lives.

One of those firefighters, Sam Jackson, talked about the opportunity to travel around the state and encourage those battling cancer.

“As men its our duty and honor to take care of the women in our lives,” said Jackson. “Just the fact that I’m able to do this and the ability to serve these women battling all forms of cancer is my favorite thing.”

The three women honored were Nena Goode, Jennifer Ray and Debbie Horton. They each received a pink teddy bear and had the privilege of signing “Cindy,” the fire truck named after a woman who lost her battle with cancer in 2011.

Thousands of signatures plaster the pink fire truck of women who have fought and beat cancer, in memory of loved ones lost and messages of encouragement.

Jennifer Ray, one of the women honored, battled breast cancer twice in 1996 and 2009 and is currently in remission. She has worked in Columbiana for 24 years and had no idea she was receiving a surprise visit today.

“My co-workers mean more to me than most people because I am with them so often,” said Ray. “Without their support while I was going through treatment, I don’t think I would of made it without them. I am also very appreciative of Tammy Shaw for putting this together and it’s an awesome way to be honored this way.”

Family members and co-workers gathered Thursday morning to see the pink fire truck and pay tribute to the three Columbiana women who have fought through all the struggles that come with cancer.

Ray gave some advice to anyone who might be diagnosed or is currently battling cancer.

“The main thing is to just put trust in the Lord and have a positive attitude,” said Ray.