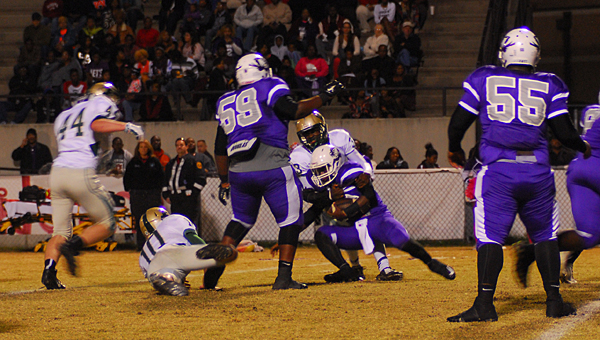 Pelham’s Malik Copeland (3) takes down a Minor receiver during the Panthers’ 22-14 loss to the Tigers on Oct. 24. Reporter Photo/Neal Wagner)

ADAMSVILLE – The Pelham Panthers were unable to take advantage of a trio of Minor turnovers on Oct. 24, as the visiting team came up short 22-14.

Pelham’s Tyler Wilburn intercepted the ball twice, and Jon Drake came up with a fumble recovery, but the Tigers used a strong ground game to churn out 354 rushing yards and pull away from the Panthers.

“Defensively, I thought we made some plays, but we couldn’t do anything offensively,” Pelham head coach Brett Burnett said. “When you’ve got five in the box and you can’t run, you know it’s going to be a long night.”

Drake led the Panthers’ defensive effort with 10 tackles, followed by Auston London, Chase Shearer and Malik Copeland, who each had nine tackles.

Moregan Sharp led Pelham’s ground game, gaining 78 yards on eight carries before he was sidelined with an injury.

RJ McCall and JT Reed led the Panthers in receptions, with 46 yards on five catches and 40 yards on six catches, respectively.

Minor scored midway through the first quarter on a five-yard touchdown run, followed by a successful two-point conversion.

Pelham answered less than a minute into the second quarter when Sharp broke free for a 74-yard touchdown run. The two-point conversion failed, giving the home team an 8-6 advantage.

The Panthers had a chance to pull ahead midway through the second quarter, but Austin Bowen’s 26-yard field goal attempt was blocked, leaving the score at 8-6 at the half.

The Tigers added a pair of touchdowns and a two-point conversion to start the second half, putting them ahead 22-6 at the beginning of the fourth quarter.

Pelham’s last score of the night came when Burnett connected with Reed on a three-yard touchdown pass with 10:16 left in the game. JT Kepler’s two-point conversion brought the game to 22-14.

Pelham had a chance to tie the game up when it started a drive at its own 11 with 4:04 left, but the Panthers turned it over on downs near midfield with less than a minute left.