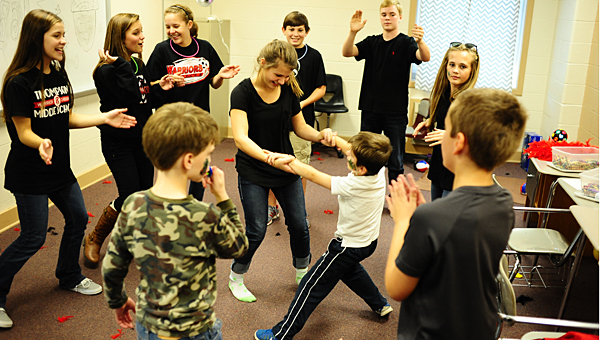 ALABASTER – The song “Happy” by Pharrell echoed through the hallways of Alabaster’s Thompson Middle School on the afternoon of Oct. 24 as sounds of laughter emitted from a classroom in the school’s northern wing.

While it could have been a day of fun and games for some of TMS’s well-behaved students, those students instead decided to donate their rewards to their special-needs peers.

For a few hours, the TMS hallways were filled with everything from miniature golf to face-painting stations as the school held its first fall fling for the Warrior Center. The Warrior Center, which is housed on the TMS campus, serves Alabaster students with significant special needs.

The event was organized by a group of TMS students who had already earned a “reward day” because of their good behavior earlier in the school year. But instead of enjoying the day for themselves, the TMS students decided to organize the fall festival for those at the Warrior Center.

“We just wanted to do it for the kids,” said TMS seventh-grader Noah Tanner. “We’ve had a great volunteer effort today. It’s been a schoolwide event.”

In the weeks leading up to the fall festival, the TMS students visited local businesses and city leaders to gather donations to use as prizes in the event’s games.

“It was so easy for us, because they planned it all,” Jackson said, noting many of the school’s students were out on a field trip on Oct. 24.

Warrior Center teacher Candice Chenault said her students were “extremely” excited about the event, and said the students who worked to organize the event were “just as excited.”