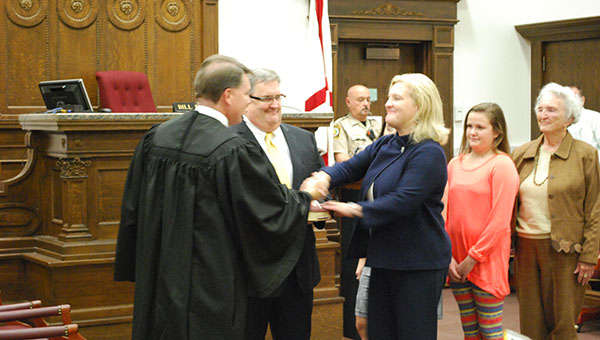 Lee is taking over the responsibilities of Robby Owens who retired as district attorney last month. Lee had previously served as Owens chief assistant district attorney for more than 10 years before being appointed by Gov. Robert Bentley on Sept. 12.

Courtroom No. 5 was filled with members of the DA’s office, family members, law enforcement officials and more who came to pay tribute to Lee for her dedication and hard work moving forward.

Lee said she was excited to begin her tenure as district attorney, and stated that she has been surrounded by great people who have one goal in mind.

“I hope to do the best job that is absolutely possible but I’m only as good as all of these other people who work in the DA’s office,” Lee said. “We hope to be here for a long time and what we hope is to see justice served and we hope to find the truth.”

Lee has already been hard at work after taking over for Owens’ on Oct. 1.

Lee’s first case as district attorney was a capital murder case that saw the defendant receive life in prison without parole after a 2012 triple-murder.

Lee has enjoyed working in her career path and wants to continue to help victims in cases as she begins her tenure of district attorney.

“What I like doing with what I do is working with the victims because they are at their lowest point and I feel like it’s a calling for me,” said Lee. “The people of Shelby County and the people I work with here are very reasonable and good people.”

An Aldi supermarket currently is under construction at the intersection of U.S. 31 and Shelby County 11. (File) By NEAL... read more