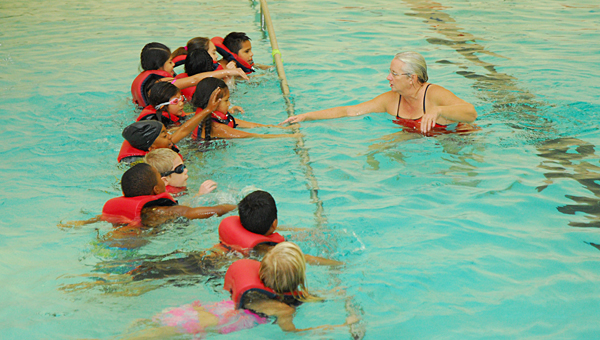 ALABASTER – Meadow View Elementary School second-grader Valeria Perez had never been in the water before taking the plunge into the Alabaster YMCA’s swimming pool on Oct. 29.

A little more than an hour after arriving at the facility, Perez, who was wearing a life vest, was paddling by herself between an underwater handrail and YMCA lifeguard Deb Jones.

“I was kind of nervous,” Perez said after she exited the pool during her class’s learn to swim day at the YMCA.

When asked if she felt more confident in her aquatic skills after spending time in the YMCA pool, Perez smiled and nodded before rushing to join her classmates as they prepared to load the bus to return to school.

Perez was among hundreds of MVES second-graders who either learned to swim or honed their swimming skills at the YMCA through a partnership stemming from a 2014 Leadership Shelby County project.

On Oct. 29, the students spent time in a classroom setting learning about everything from water and boat safety to nautical terms before donning their swimsuits and plunging into the dome-covered pool for hands-on instruction.

While in the water, students were separated into two groups depending on their swimming skills while YMCA lifeguards completed water activities with them.

“It’s about saving lives. Nationwide, one out of every four deaths among those 14 and younger are drowning incidents,” said Alabaster YMCA Executive Director Rhonda Elmore. “In Shelby County, it’s about one or two per year, but that’s still too many. It’s 100 percent preventable.”

In early October, groups of the city’s special-needs students completed the learn to swim program. During the remainder of the school year, the rest of Alabaster’s second-graders at MVES and Creek View Elementary will go through the program.

“Some already know how to swim, and some don’t. It’s really an opportunity for us to give back to the community,” said YMCA Youth Sports and Aquatic Director Chris Honeycutt. “It’s been an absolute joy to do this.”

Elmore, who was on the Leadership Shelby County team to develop the learn to swim program, said it will cost the YMCA about $5,000 for the school year to offer the program, which comes at no cost to students or parents.

Alabaster City Schools covers transportation costs for the students, but the YMCA is looking for local donors to help ensure the program remains free to students in future years.

Sam Hunt’s new album “Montevallo,” is based off the name of the Shelby County town that has influenced Hunt the... read more