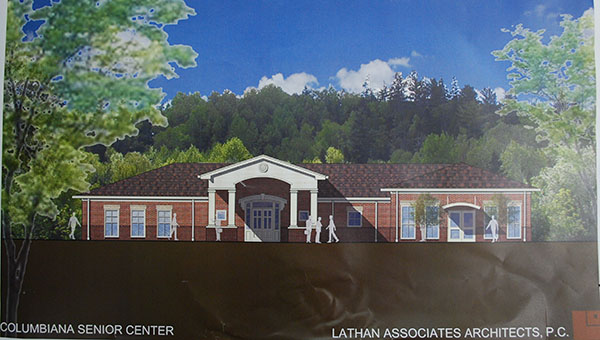 Here is an artist rendering of the new Columbiana Senior Center. (Contributed)

COLUMBIANA–The city of Columbiana has approved plans to build a new senior center that will be located across the street from city hall in what used to be the Shelby County Health Department building.

Originally the plan was to try and renovate the old Shelby County Health Department building on Mildred Street but feasibly it made more sense to demolish the old building and build the new senior center in its place.

These plans were discussed and the resolution was approved in the county commission meeting on Monday, Oct. 27.

Bids were evaluated for the project and it was determined that Douglas Built, LLC was the low bidder and awarded the construction contract for $565,877 to build the new senior center.

Shelby County Manager Alex Dudchock discussed the first step of the project and when it is expected to start.

“The construction of the new senior center will start with the demolition of the old Shelby County Health Department building that has been un-operated and unoccupied for the past five years that the county has been using as warehouse space,” said Dudchock.

“The contract is currently being finalized and the first thing will be the demolition and site improvements that should start within the next 45-60 days.”

City of Columbiana Mayor Stancil Handley is excited about the new senior center coming to Columbiana and the benefits it will bring to the area.

“The recreation center has been good but the problem is that the seniors can’t have permanent things and the center is only open half a day so this new building will be perfect,” said Handley. “Right now we have 20-25 regular senior citizens and this new building will allow us to expand the program and hopefully have it open all day with more events, activities and classes which should increase participation.”

The new senior center has a $635,000 project budget, which includes various contributions.

The City of Columbiana is contributing $225,000, Shelby County Health Foundation is providing $150,000, the Shelby County Commission’s cash and in-kind contributions include $50,000 and a community development block grant was given totaling $210,000.