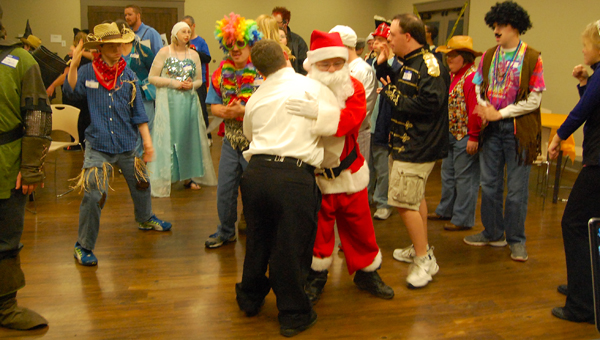 ALABASTER—Santa danced with Robin Hood while Elsa from Disney’s Frozen got a slice of pizza and Daniel Boone chatted with friends. No, this wasn’t at Disney World or Comic-Con, it was the Alabaster Parks and Recreation Therapeutic Programs Halloween Dance and Party.

On Oct. 30, high school students and adults with special needs from Alabaster and Hoover enjoyed an evening of dancing, games, food and socializing at the Halloween-decorated Alabaster Senior Center.

“It’s just a lot of fun,” Alabaster Senior Adults and Therapeutic Manager Alicia Walters said. “They can meet other folks and have fun in a safe environment.”

Costumed partygoers took pictures at a Halloween-themed photo booth, ate pizza, made arts and crafts, played games and danced to songs played by a DJ.

The party was not only a chance to dress up and have a good time, but it also gave attendants the opportunity to meet peers from neighboring cities.

“We invited local groups who have programs similar to our,” Walters said. “This is a city-run event, we focus on Alabaster… but we wanted to invite our neighboring communities. It’s just kind of an additional event they can come and enjoy.”

Sarah Olive, dressed as an Auburn fan for the party, said she enjoyed the opportunity to socialize and meet people.

“I like meeting new people and making friends,” Olive said, but she was quick to add the music and dancing were her favorite parts of the Halloween party.

“I kind of agree with her,” a Daniel Boone-costumed Daniel Dabbs chimed in, adding he enjoys dancing and also spending time with friends.

The Oct. 30 Halloween dance and party was the first of its kind, but Walters said she hopes to make the event into an annual tradition in Alabaster.

“If it’s a success, we’d like to continue to do it,” Walters said. “We have a therapeutic program here, and I’m just constantly wanting to grow the programs and meet the needs.”