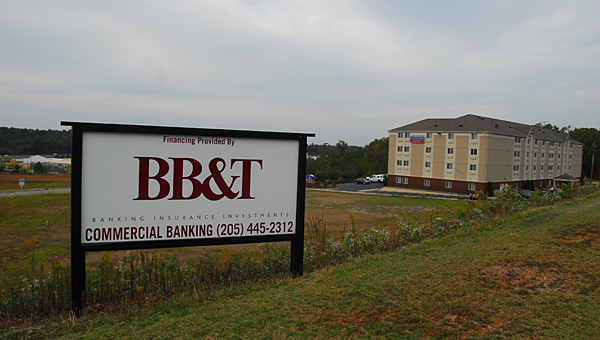 ALABASTER – A developer is looking to bring a new Holiday Inn Express hotel to the Propst Promenade shopping center in Alabaster, according to city leaders.

The city has received plans calling for an about 60-room hotel in a currently vacant lot next to Candlewood Suites in the Propst Promenade, Alabaster City Manager George Henry confirmed in an email.

A sign posted on the property confirms the project is being funded by BB&T Commercial Banking, but does not lay out a timeline for opening the new hotel.

Before construction can begin on the new hotel, the plans still must be reviewed by the Alabaster Planning and Zoning board, as portions of the property must be rezoned to allow the hotel to move forward.

The number of rooms in the hotel will be determined by the zoning assigned to the property by the Planning and Zoning Board, which holds its meetings on the fourth Tuesdays of each month at 5 p.m. at Alabaster City Hall.

Plans for a new hotel in the Promenade have been in the works for more than a year.

During a November 2013 meeting between city leaders and several Alabaster business owners, Henry said the city had seen interest from “multiple hotels” looking to build in the Propst Promenade.

Candlewood Suites currently is the only major-brand hotel in Alabaster, and the city’s mayor and City Council members previously said they are looking to grow the hotel market to allow visitors to stay in the city while attending events such as the annual Alabaster CityFest.