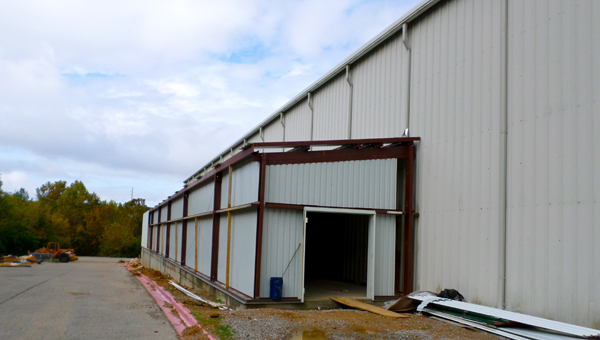 An addition to the west wall of the Pelham Civic Complex and Ice Arena will allow seating for nearly 400 to be added to the facility’s practice rink. (Reporter Photo / Molly Davidson)

A new addition to the west side of the rink will house the player and referee benches and allow the practice rink to accommodate seating for nearly 400 people. Tate estimated the project will be finalized in less than one month.

The seating will be retractable, enabling the space to accommodate numerous events and truly be a “multipurpose event facility,” Tate said.

“Now it’ll be something we can actually host events in if we do need it,” Tate said. “(It will be) a multipurpose event facility now.”

The addition to the practice rink will be complete in time for the Pelham Civic Complex and Ice Arena’s two largest hockey events, the SEC Hockey Championship on Feb. 6-8, 2015, and the American Collegiate Hockey Association Division III National Championship on March 10-14, 2015.

“Alabama had some pretty good crowds, upwards of 1,000,” Pelham Civic Complex and Ice Arena Director of Hockey Randy Murphy said. “There’s going to be a lot of people there.”

The ACHA Division III National Championship will also draw large crowds, Tate said, noting 16 teams from across the country will compete for the national title.

“I just wanted to expose this community and our program to the highest level of hockey we have in the area,” Tate said.