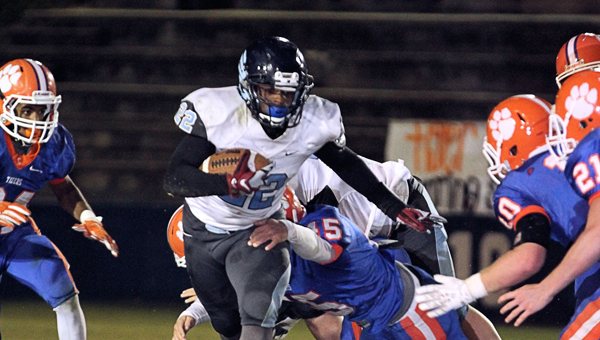 Calera running back Shakeith Tyes shakes off a defender in a win over Chilton County on Oct. 30. (Brandon Sumrall/Clanton Advertiser)

By BRANDON SUMRALLL/For the Reporter

CLANTON — The Calera Eagles finished their 2014 regular season by taking down the Chilton County Tigers, 39-28 on Oct. 30.

Both defenses settled into their game the remainder of the first half as neither team mounted anymore points in the half and the Eagles took a 7-0 lead to the locker room.

The Tigers (2-8 Overall; 1-5 Area) took the opening kickoff and after a short return, quarterback Anthony Chavez capped off the drive with a 13-yard touchdown run. With Chavez adding the PAT, the game was all tied up at seven.

On the Eagles’ next possession, on a second and eight from their own twenty-eight, Calera running back Shakeith Tyes took the snap from the wildcat formation and race seventy-two yards for a Calera touchdown. Jaquares Martin broke through the line to block Fords’ PAT, but the Eagles lead 13-7.

Chavez then tossed a eight yard touchdown pass to Keandre Binion. With the PAT good, the Tigers took a 14-13 lead.

The Eagles then pounded their way down the field to cap off a seventy nine-yard drive with a five-yard touchdown run by Tyes. With a missed two point conversion, the Eagles took a 19-14 lead.

The first turnover of the game came on a Tigers fumble the Eagles secondary to give Calera the ball at the Tiger forty-five. Two plays later Tyes added another Eagles touchdown with a eighteen yard touchdown run to bring the score to 25-14.

Not to be outdone, Chavez found Keishun White streaking down the Calera sideline for a 54-yard touchdown pass on the Tigers next possession and with 9:20 left in the forth, Calera lead 25-21.

Another Tiger turnover allowed Tyes score use of his arm and a 54-yard touchdown pass to Dylan Reddin. With 3:35 to play, Calera had a 39-21 lead.

Tyes lead the Eagles running game with 260 yards on 32 carries with three touchdowns.

Vincent’s Arshon Willis tries to break away from a defender in a battle with Talladega County Central Oct. 30. (Reporter... read more