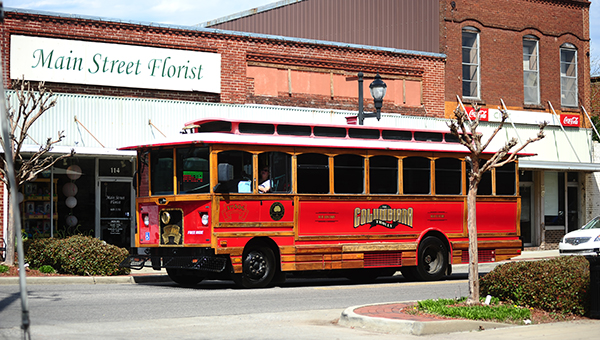 Two part–time drivers have been hired to run the Columbiana trolly and route times and scheduled stops will soon be added as well. (Reporter Photo/Jon Goering)

COLUMBIANA–The Columbiana trolly seen rolling around town will have more stability in the coming weeks after the hiring of two part-time drivers and establishment of designated routes with scheduled stops.

When the trolly was brought to the city in April, the initial plan was to have volunteer drivers run the trolley mornings and afternoons for five days a week.

The plan was unsuccessful due to a lack of volunteer drivers, and it caused concern in the community because of lack of consistency.

All of that is now changing, according to Columbiana Mayor Stancil Handley, as better plans are in store for the coming weeks.

“We had to park the trolley for a while until we made it more reliable,” said Handley. “We hired two part–time drivers and the trolley is now running from 8:30–11:30 in the mornings and from 1–4:30 in the afternoons five days a week. For certain holidays and events, it will also be running.”

The city of Columbiana received some funding for the trolley from a ClasTran grant and information about ClasTran is provided on the the grant’s website.

The Columbiana trolly is spelled without an “e” because mayor Handley and the city decided to use that as an alternative spelling to add to the uniqueness of Columbiana.

A Boy Scout from troop 560 will soon be constructing an Eagle project to set up passenger stops around town for the trolly.

Handley said he has enjoyed what the trolley has brought to the city of Columbiana so far and thinks it will continue to be a trendsetter for other cities in the future.

“There are two major positives to the trolly,” said Handley. “One being that it provides free transit rides for residents and the other being for public relations reasons. Everybody likes seeing it and some people even use it for recreation and use it as a fun ride.”

Montevallo falls to Billingsley at home