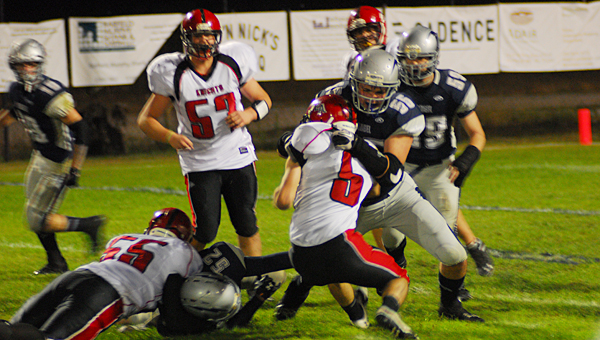 Evangel’s John Will Graham (55) takes down Ezekiel’s John Borland (5) during the Lightning’s 55-28 victory over the Knights on Oct. 31. (Reporter Photo/Neal Wagner)

MONTEVALLO – The Evangel Christian Lightning rode a dominating ground game to a 55-27 victory over the visiting Ezekiel Academy Knights on Oct. 31 to earn a spot in the Alabama Christian Sports Conference championship game.

Evangel finished the night with 297 total yards of offense, 245 of which came on the ground. The Lighting will now face Central Christian at home on Nov. 7 in the ACSC championship game.

“They did very well. We played good as a team,” said Evangel head coach Don Murphy. “Our first (team) kids did well and got us ahead, and our second-team kids got in there and did a great job. It was a good tune-up for next week.

Mason Murphy scored a pair of touchdowns in the first quarter on runs of 26 and 17 yards, and Micah Murphy added a successful PAT to put Evangel ahead 13-0.

Evangel then surged for a pair of touchdowns before the half: One on a 28-yard pass from Thompson to Baggett and another when Andrew Collins recovered a Knight fumble and ran it back 5 yards to score. Micah Murphy added PATs on all four Evangel second-quarter touchdowns.

The Knights opened the second half with a 14-point surge, but Evangel answered with a 6-yard touchdown pass from Micah Murphy to Collins to bring the game to 48-21 midway through the third quarter.

After another Knight touchdown less than a minute later, Evangel scored the final points of the night when Abraham ran into the end zone from 28 yards out.

Calera running back Shakeith Tyes shakes off a defender in a win over Chilton County on Oct. 30. (Brandon Sumrall/Clanton... read more