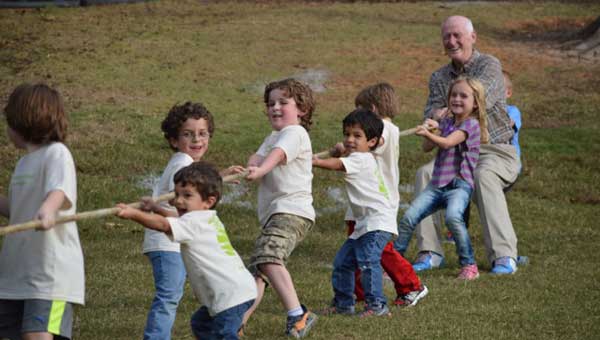 Hilltop Montessori students participate in a tug-of-war during a school-wide celebration to kick off its capital campaign.

MT LAUREL – The students of Hilltop Montessori School and the Hilltop PTO collaborated to kick off the school’s capital campaign to raise funds for its future expansion, according to a press release from the school.

The Phase Three Expansion will include a community center/gymnasium, a teaching kitchen to allow for locally raised, healthy lunches from the school’s gardens, a science laboratory and additional classrooms, as well as expanded art and music areas for performances.

The students, ranging in age from 18 months through eighth grade, raised pledges by running and biking, collecting over $10,000 for the new school. The fundraising ended with a school wide celebration against the beautiful backdrop of the Mt Laurel community, where all the families and students celebrated, while dining on healthy snacks, playing games and running the last several laps of their pledges.

Trent Estes, President of the PTO at Hilltop, remarked that it was “extremely special to watch the excitement on the children’s faces as they celebrated all their accomplishments.”