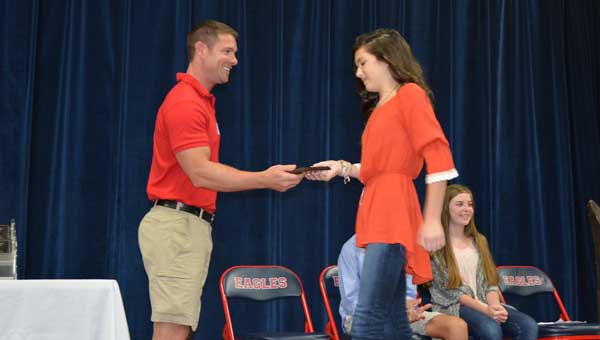 NORTH SHELBY – “Never give up, never stop trying, make no excuses, and everything happens for a reason,” are some of the verbal comments remembered by Oak Mountain Middle School students after hearing encouraging words from Noah Galloway, the 2014 Men’s Health Ultimate Guy, at a recent school assembly.

Galloway is a veteran of the Iraq wars and valiantly served his country until an IED explosion significantly wounded him in December 2005. He lost both his left arm and leg in a night accident when his Humvee triggered the enemy’s hidden explosive device.

After facing numerous emotional, physical, and mental challenges, Galloway finally decided, “no excuses.”  He began immense athletic training pushing himself to previously unknown limits.  As a result of this regimen, his “No Excuses Charitable Foundation,” and advocacy for children’s positive well-being, Galloway was named “2014 Ultimate Men’s Health Guy by the publication of the same name.

Galloway, assisted by OMMS Student Government Association officers, awarded the following students a Character with Character award for their positive attitudes and exemplary behavior during the first nine weeks:

Hilltop Montessori students participate in a tug-of-war during a school-wide celebration to kick off its capital campaign. FROM STAFF REPORTS... read more