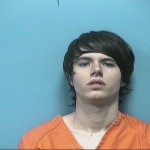 The Shelby County Drug Enforcement Task Force arrested Carlin Wells Saunders, who lists an address in the 2000 block of Village Lane in Calera, Oct. 31 on two felony charges of marijuana trafficking and manufacturing of a controlled substance, as well as a misdemeanor charge of possession of drug paraphernalia.

According to Saunders’ arrest warrant, the incident took place on Oct. 31 when Saunders allegedly “knowingly sold, manufactured, delivered or brought into the state” in excess of 2.2 pounds of marijuana. He also allegedly manufactured the controlled substance psilocybin in “a clandestine laboratory operation… within 500 feet of a residence, place of business, church or school.”

Saunders currently remains in the Shelby County Jail on $201,000 bond. An upcoming hearing has not yet been scheduled.

Trafficking marijuana and first-degree manufacturing of a controlled substance are both Class A felonies, and are punishable between 10 years and life in prison for each count. Possession of drug paraphernalia is a Class A misdemeanor.