Christmas Parade back on for city of Calera 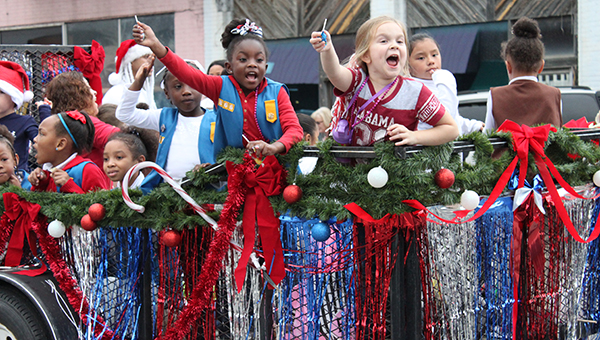 The Calera Christmas Parade was reinstated and will be held Saturday, Dec. 6 at 6 p.m. (File)

CALERA–The longtime tradition of the Calera Christmas Parade was in jeopardy of being cancelled this year and replaced with a Christmas Village event in its place but now residences can enjoy both events this holiday season.

The Christmas Parade is set for Saturday, Dec. 6 at 6 p.m. and citizens attending the parade are encouraged to begin lining up at the National Guard Armory at 5 p.m. where the parade will start. The theme of the parade is “Making the season bright.”

The city of Calera had been receiving mostly negative feedback from the community for the cancellation of the parade, citing the history and what it means to the community as one of the main reasons for the outcry.

The reinstatement of the parade was discussed at the Nov. 3 city council meeting and the goal is to make this years parade great once again.

Calera City Council member Bobby Phillips has enjoyed the Christmas parade many times in the past and thanked Mayor Jon Graham and volunteers who strived to make the parade a part of the Christmas holiday again.

“The parade is a big deal to me and it’s a big deal to the people in this city that’s been participating in it and watching it for 40 years,” said Phillips.

The route for the parade will be on Highway 31 beginning at the National Guard Armory and ending at the Calera Community Center.

Parade registration information is available on the city of Calera’s website and lists the rules and regulations of the parade.

There will be category winners for the following categories: Best holiday spirit, best use of theme, most creative and most entertaining. Winners will be notified a week after the parade.

The Christmas Village event hosted by the Calera Chamber of Commerce will be held Saturday, Nov. 22 from 1 p.m. to 5 p.m.