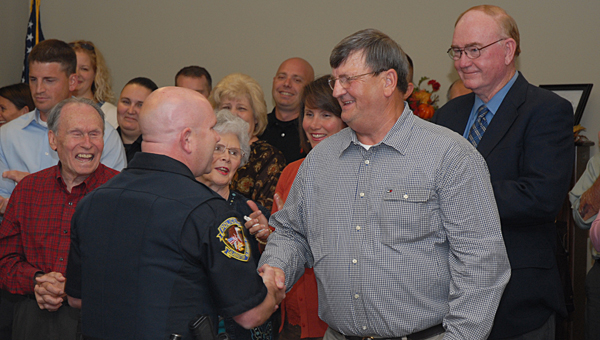 ALABASTER – Alabaster’s former police chief, Stanley Oliver, is awaiting a double lung transplant after he was diagnosed with a rare disease, and locals are working to support him and his family.

About four months after Oliver retired as the Alabaster police chief in October 2012 after 40 years in law enforcement, he was diagnosed with pulmonary hypertension, which causes high blood pressure in the arteries of the lungs. The disease can lead to extensive scarring and, eventually, non-functioning lungs.

“We went through all these tests at UAB, and they originally thought he only needed one lung transplant. But they later said he needs to have both of them transplanted,” said Oliver’s wife, Linda, the front office secretary at Alabaster’s Creek View Elementary School.

Last summer, the family was referred to the Cleveland Clinic in Ohio, and visited the facility in August for more tests, Linda Oliver said. Today, Stanley Oliver is in the process of getting on a waiting list for a double lung transplant.

Linda Oliver said doctors have been unable to determine what caused the disease for her husband, and said “he is on oxygen most of the time now.”

When CVES physical education teacher Catherine Mohon heard of the family’s challenges with the disease, she and her co-workers at the school decided to do something to help.

Since late October, the school’s health and wellness department has been selling T-shirts reading “Strength, hope and courage” to CVES students, parents and faculty members.

Alabaster Pediatric Dentistry sponsored the fundraising effort, meaning all proceeds from the T-shirt sales will be donated to the Oliver family to help offset medical costs.

CVES is accepting order forms from those interested in purchasing a shirt through Nov. 7, and order forms are available in the school’s front office.

“I love her to death, and I hope everything turns out well for them,” Mohon said during a Nov. 4 interview.

Thompson High School students sing the school’s alma mater during a “Pink out” pep rally at the school on Oct.... read more