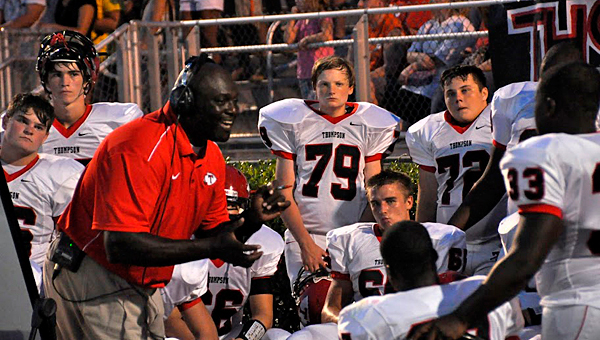 Montgomery has served as head coach of the Warriors since 2012, compiled an overall record of 7-23 and a 2-19 record against region opponents during his three-season tenure. The Warriors’ winless 2014 season ended after an Oct. 30 home loss to the Chelsea Hornets.

Montgomery previously served as the Warriors’ offensive line coach and running game coordinator, and had been a member of the THS coaching staff since 2006. Montgomery played collegiately at Mississippi State University from 1989-1992 after graduating from Okolona High School in Okolona, Miss.

He took over the Thompson football program after back-to-back one-year coaching stints by Bruce Hill in 2010 and Caleb Ross in 2011.

“We are just making a change,” Alabaster School Superintendent Dr. Wayne Vickers said during a Nov. 4 interview. “I appreciate his service in that role over the last few years.”

Montgomery will remain at THS as a physical education teacher and head coach of the school’s track team, Vickers said.

Vickers said the school system will begin its search for a new varsity football coach “as soon as possible.”

“We will be working diligently to get that process going,” Vickers said.

The next THS coach likely will wrap up the Warriors’ tenure in the current Larry Simmons Stadium off Thompson Road, as the city’s school system is preparing to break ground on a new high school and 365,000-square-foot high school and athletic complex.

As of 5 p.m. on Nov. 4, Montgomery had not returned phone calls seeking comment.