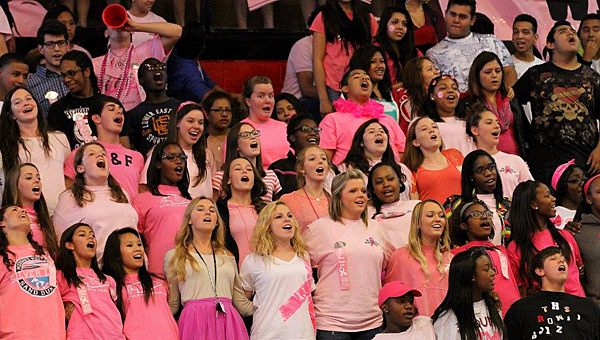 Thompson High School students sing the school’s alma mater during a “Pink out” pep rally at the school on Oct. 24. (Contributed/Eric Starling)

ALABASTER – Beth House, whose mother is facing her second battle with breast cancer, said she severely underestimated Alabaster students’ passion to support a good cause.

“I was hoping for $500, maybe $750. When she told me how much they had raised, I couldn’t believe it,” House said of Thompson High School business teacher Katie Manel. “It was a really good surprise.”

For the past few months, House, an English teacher at THS, has been working to raise $2,500 to donate to the Breast Cancer Research Foundation in honor of her mother, Montevallo resident Mary Lou Williams.

When Mantel’s Future Business Leaders of America students decided to do a school system-wide fundraiser during Breast Cancer Awareness Month in October, she knew exactly where the money should go.

Through the fundraiser, students in each Alabaster school were able to purchase a “pink out” T-shirt and wear it to class on Oct. 24, and to the Thompson Warriors’ football game against Oak Mountain the same night.

“The idea was a hit and we asked all of the Alabaster City Schools to participate,” Mantel said, noting her mother has also battled breast cancer twice before. “Every school in the system sold T-shirts to teachers, students and parents.”

With the help of teacher volunteers at each school, the FBLA was able to sell 872 shirts and raise $2,000 to donate to the Breast Cancer Research Foundation.

“I had no idea it would be that much,” House said. “I knew they would do well, but this is great.”

The donation met most of House’s $2,500 fundraising goal, and she is planning to continue fundraising for the Breast Cancer Research Foundation for the next two months.

House and her husband, Mike, have been fundraising since August while training to run in the Dopey Challenge at Walt Disney World in early 2015.

“The pink T-shirts were not only an awesome display of school spirit, but we were able to donate a lot of money to a great cause,” Mantel said, giving praise to United Logo in Alabaster, which provided the shirts and helped to offset some of the cost to the school.

Christmas Parade back on for city of Calera

The Calera Christmas Parade was reinstated and will be held Saturday, Dec. 6 at 6 p.m. (File) By GRAHAM BROOKS... read more