Jabo Waggoner will serve his seventh term as Alabama’s District 16 Senator, defeating Cindy Bell in the Nov. 4 general election with more than 80 percent of votes, as of 11:30 p.m. on Nov. 4. 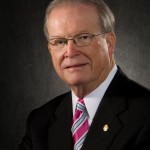 “I’m just as excited about (representing State Senate District 16) as the day I started my first term in Senate,” Waggoner said during a Nov. 5 telephone interview. “Being in the majority really makes a difference. We have again what you would call a super majority.”

“Throughout the campaign we said the problems we have in the state don’t have party lines,” Bell’s Campaign Manager Elliot Bell said in a Nov. 5 phone interview. “We wish Senator Waggoner the best of luck… to tackle those issues.”

Wagoner ran on a conservative platform advocating for the removal of “unnecessary” governmental spending and “red tape”, a “commitment to excellence in our schools” and keeping “taxes low.”

During his seventh term in the Alabama Senate, Waggoner said he plans to focus on the Birmingham Waterworks Bill and improving the state’s incentive program to attract new businesses and industries to Alabama.

“We have gotten behind in offering (incentives),” Waggoner said. “One of my priorities is to improve our incentives program to attract more industries to Alabama.”