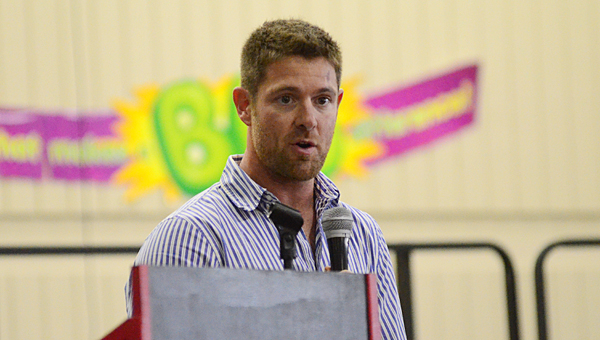 ALABASTER – U.S. Army Sgt. Noah Galloway vividly remembers what he saw when he walked out of a local Subway restaurant a little more than a year ago.

“There were a group of kids crowded around my Jeep, and I thought ‘What are they doing?’” Galloway told a group of hundreds of Thompson Sixth Grade Center students during a Nov. 6 Veterans Day program in the school’s auditorium. “When I walked up, they asked if I was a veteran. When I said yes, they thanked me for my service.

“I tell you, that was incredible. When a student says that without being asked by an adult, you have no idea what it does for that person,” Galloway said. “Suddenly, it makes all the sacrifices you’ve made for your country worth it.”

Galloway, an Alabaster resident, has gained national acclaim over the past few months after he won Men’s Health Magazine’s “Ultimate Guy” contest, beating out 1,300 other contestants to be featured on the front of the magazine in early October.

Over the past few weeks, Galloway has appeared on national television shows such as the “Today” show and “The Ellen DeGeneres Show.”

On Dec. 19, 2005, Galloway was assigned to the 1st of the 502nd Infantry of the Army’s 101st Airborne Division, and was driving an armored Humvee near Baghdad, Iraq, when the vehicle hit a tripwire for an improvised explosive device.

“My life was about being active. When I lost my arm and leg, I decided my life was over,” Galloway said, noting he spent his days drinking and sleeping after he returned home from Iraq. “But one night, I looked in the mirror, and I decided I need to stop concentrating on what I lost and instead focus on what I have left.”

After working to regain his fitness, Galloway decided to enter the Men’s Health contest. Since he won, “Doors have been opening left and right,” he said during an interview after the Veterans Day program.

“I’m not originally from Alabaster, but the support I got from Alabaster during the contest was amazing,” Galloway said. “You would think I’ve been living here my whole life.”