Helena falls in first round of playoffs 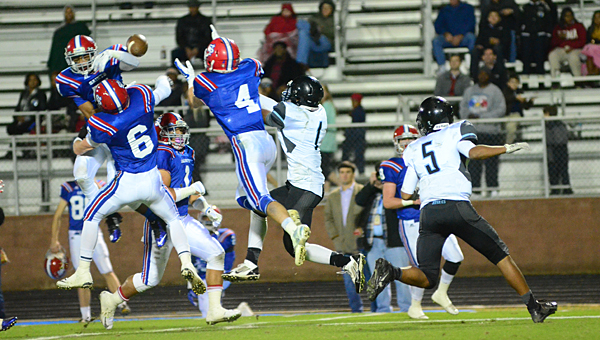 A trio of St. Pauls defenders bat away a pass from Helena quarterback Riley Davis intended for Austin Davis (1) during the Huskies’ 57-14 loss to the top-ranked Saints in Mobile on Nov. 7. (Reporter Photo/Neal Wagner)

MOBILE – It wasn’t the ending Helena head coach Watt Parker hoped for on Nov. 7, but he and his team boarded the bus with plenty of hope for the future.

After earning a berth in the AHSAA Class 5A playoffs in the school’s first year of existence, the Huskies, who ended the season with a 5-6 overall record, fell to the top-ranked Class 5A St. Pauls Episcopal Saints 57-14. 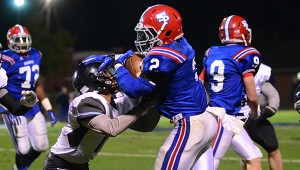 Helena’s Terrel Blevins attempts to take down St. Pauls running back Ostin Mcpherson during the Huskies’ 57-14 loss to the Saints on Nov. 7. (Reporter Photo/Neal Wagner)

“That’s what a number-one team does to people, and we’re just excited about the opportunity to get into the playoffs and come down here,” Parker said. “I told our guys at halftime, ‘Guys, we aspire to be that kind of program.’

“This was a great chance to learn about ourselves, how to face adversity and how to keep fighting no matter what. I just really appreciate the great support of the community, the school, the administration and especially these kids that were seniors and juniors and had the chance to stay at Pelham or come here to take that leap of faith,” Parker added. “Now, this is just a springboard to get us into the offseason. Hey, we made the playoffs, now what are we going to do next?”

The Saints jumped out to an early lead after recovering an onside kick to start the game. St Pauls reeled off 50 unanswered points in the first two quarters and did not punt the ball in the first half.

Jack Reid’s point-after split the uprights, bringing the game to 50-7 at halftime.

Playing with shortened quarters and a running clock during the second half, the Saints tacked on another touchdown to mark the only points scored during the third quarter.

Helena’s final points of the night came late in the fourth quarter when Riley Davis ran the ball into the end zone from two yards out. Reid’s successful PAT brought the game to 57-14.