PELHAM—Eleven members of the Pelham Fire Explorer team traveled to Tuscaloosa to participate in the annual Fire Explorer Weekend training event at the Alabama Fire College on Nov. 1 and 2. 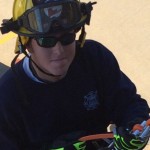 For two days, the Fire Explorers participated in training exercises, including search and rescue training, climbing a 75-foot ladder on a fire truck, rope rescue training and rappelling from a five-story building.

“It’s all just hands-on training,” Pelham Fire Department Lt. Ricky King said. “We had some first-timers, we had some second-timers and we had some third-timers.”

“The speaker for Saturday night… called out Pelham… praising their leadership,” King said. “(That) was really cool.”

The weekend at the Alabama Fire College is one of three main events the Pelham Fire Explorers attend every year, the other are the Trussville Explorer Competition and the Sept. 11 Memorial Stair Climb in Montgomery, in which explorers and firefighters climb 110 flights of stairs.

The Pelham Fire Explorer program introduces students, ages 14 through 20, to the inner-workings of the Fire Department by offering them hands on training and experience.

“They come in and explore the fire service and see if its something they’d like to do,” King said. They get hands on (experience) in everything.”

Explorers meet twice a month and train with the firefighters. After six months of training, they are allowed to ride along with firefighters to respond to calls.

“They bring (us) tools… whatever hands-on (tasks) they can do,” King said, however he noted the Fire Explorers are not allowed to fight structural fires or treat patients, King explained.

A number of former Pelham Fire Explorers have gone on to careers in the Fire Department and in law enforcement, King said. The program currently consists of 17 Fire Explorers.